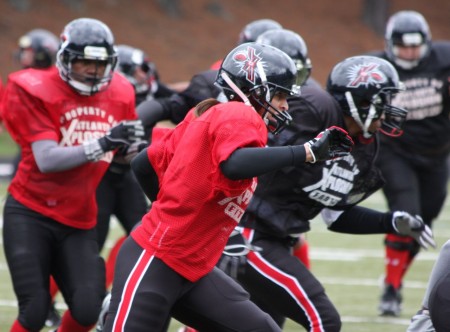 The hard-hitting action of professional, full-tackle women’s football kicked off Sunday as the Atlanta Xplosion staged a scrimmage in advance of their season opener.

The Xplosion, which opens its seventh season on April 11, is a favorite of lesbian sports fans and their roster often includes lesbian players. Players ran through game-like situations in full pads on Sunday during the intersquad scrimmage in the hopes of raising fan awareness and selling some of the $10 tickets for their four home games.

The team starts with the Clarksville Fox on April 11, Chattanooga Locomotion on April 25, Dallas Diamonds on May 2 and Palm Beach Punishers on May 16. The Xplosion ends the season with four consecutive games on the road.