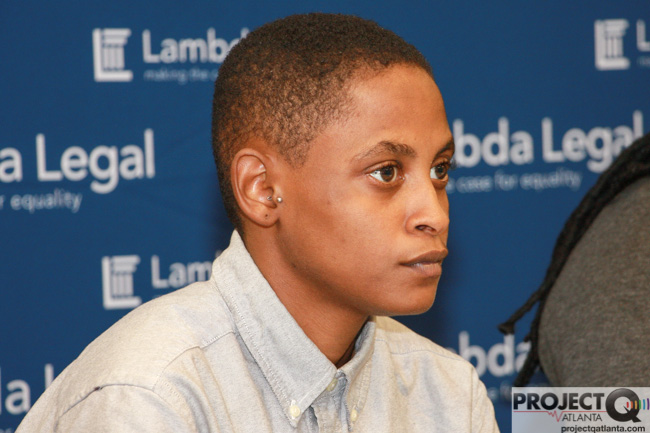 An Atlanta woman harassed and then fired from her job for being a lesbian is asking the U.S. Supreme Court to hear her case that argues federal law bans discrimination based on sexual orientation.

Jameka Evans joined her attorneys from Lambda Legal at their Midtown offices on Thursday to announce that they've petitioned the high court to review her case.

“During my term of employment, I endured harassment and denial of equal pay and retaliation simply because of my sexual orientation and lifestyle. There is where my fight began and hopefully it will end at the Supreme Court,” Evans said.

Evans, 28, was fired from her job as a security guard at Georgia Regional Hospital in Savannah in 2013 and sued in 2015. Attorneys for Evans (photo) argued that the hospital violated Title VII of the Civil Rights Act of 1964 by discriminating against her on the basis of her sexual orientation and her nonconformity with gender norms and appearances.

In December 2016, Lambda Legal argued that the case should proceed during a hearing before a three-judge panel of the Atlanta-based 11th Circuit U.S. Court of Appeals. On March 10, the court ruled 2 to 1 against Evans. In July, the court refused to rehear the case, which prompted the appeal to the U.S. Supreme Court.

Greg Nevins, an attorney and Employment Fairness Strategist in Lambda's Atlanta office, said the case would allow the Supreme Court to settle a “stark split” between judicial circuits on the issue of whether federal law protects LGBT from employment discrimination.

In April, the full Seventh Circuit ruled that workplace discrimination based on sexual orientation violates federal civil rights law. That decision came in Lambda's case representing Kimberly Hively, an instructor at Ivy Tech Community College who was fired for being a lesbian. In June, the Second Circuit agreed to rehear Zarda v. Altitude Express, which is the case of a New York skydiving instructor who was fired from his job because he was gay. Yet in Evans' case, the 11th Circuit disagreed.

“We are calling on the Supreme Court to take this opportunity to resolve the confusion that is out there and make a clear statement that this type of discrimination is already covered under federal law and that there's a remedy for it,” Nevins said.

Simone Bell, Lambda Legal's Southern Regional Director, said the core of the case is about LGBT people being able to work without facing discrimination.

“We are asking that all LGBT people are free from employment discrimination based solely on their sexual orientation. At the end of the day, these cases are fundamentally about the right to workplace protections, against discrimination for lesbian, gay, bisexual and transgender people to make a living, to put a roof over our heads and to take care of our families,” Bell said.

Evans said Thursday that since the case has been filed, she has relocated from Savannah to Atlanta. She also thanked Lambda for taking up her court fight.

“It's been a very humbling experience. Lambda Legal's assistance has been once of the best things that could have happened for my case. I am very appreciative that they're helping me fight for equality – not just for myself but everyone who is LGBT,” Evans said.

Nevins said the high court could agree to hear the case during the term that opens in October and runs into June 2018.

“Why the Supreme Court now? The legal landscape is just absolutely confused about this and it is such a simple proposition,” Nevins said.