Atlanta wins tops and bottoms in the gay U.S.A. 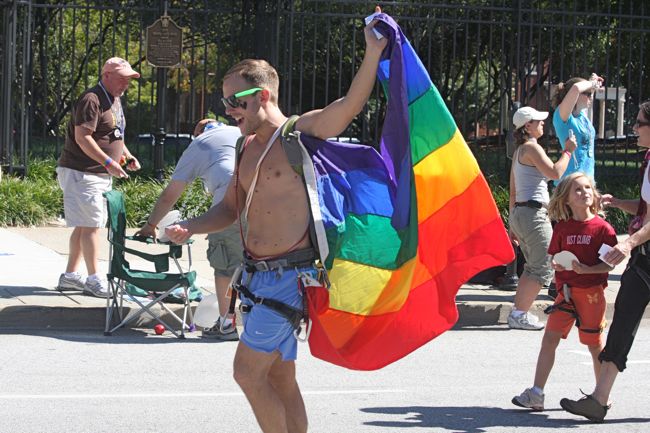 Less than a week after bonafide statisticians named Atlanta among the Best in Gay in all U.S. metropolises, another group takes a run at rankings that puts our town at No. 1 gayest in one way, among the worst in others.

Gayest cities rankings come and go, but Atlanta is almost always in the mix. When Nerd Wallet used measurable criteria, the LGBT-ATL was topped only by Seattle and San Francisco. Now New York-based digital media outlet Vocativ finds a gay new order in which Atlanta often falls near the big old bottom. Meet the Queer Index.

The new study ranks Atlanta No. 1 in “LGBT and LGBT-friendly Businesses." Using as its source the Atlanta-based Gayborhood app and its customer base that's 40 percent local, the survey counts more than three times the number of businesses in Atlanta than the next highest city. But when Vocativ created a Top 35 list from 16 categories including that one, Atlanta slides to a lowly No. 30, shout-outs notwithstanding.

If not for Georgia's antiquated stance on marriage and unclear adoption legislation, Atlanta would be much higher on our Queer Index. The city is tops for queer-friendly businesses (ATL has the highest number of Gayborhood-certified businesses with 685—almost three and a half times more than Chicago). It also gets high numbers for media engagement, a substantial singles scene, pride events, culture and lots of folks looking to make connections (preferably without clothes). What's more, the city is a Southern beacon for same-sex couples who love Atlanta’s varied outdoor activities and sporting options.

That’s awesome, but you can’t pay any of it too much mind. Sub-categories include “Number of out adults,” which is uncountable. It also grabs from skewed sources for immeasurable criteria like “Number of gay and lesbian singles” and the terribly subjective “Number of cultural options.” Only museums and theaters need apply.

Atlanta falls short in most of those categories, but as they say in statistics class, "Junk in, junk out."

The gay ATL comes in at No. 5 for “Prevalence of Queer Media.” That uses estimated LGBT newspaper circulation from the self-reported online resource Gaydata. Southern Voice, which folded in 2009, Eclipse Magazine, which folded in 2006, and the GA Voice are the only Atlanta media outlets listed on the database.

Finally, after a bunch of Vocativ 20-somethings in New York found some of us looking for love on Craiglist, Atlanta is No. 4 in “Availability of hookups.” Curiously, we’re not in the Top 10 for “Availablity of casual sex” (Because both? Really?). The latter stat is based on rent boys and bathhouses per 100,000 people.

In the end, we’re always happy to be at the party. Can we hang our hats on the Queer Index rankings? No. Will we take it? Absolutely. For all its flaws, it’s still fun to be in the mix and to click-surf around all of Vocativ's findings.