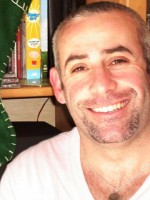 The Aug. 1 shooting at a Tel Aviv gay center that left two people dead will resonate in Atlanta during an interfaith vigil.

The vigil, set for Tuesday at 7 p.m., is sponsored by Congregation Bet Haverim, the Rainbow Center and Central Congregational United Church of Christ, which is hosting the event.

“This vigil is to offer our prayers to those affected by this tragedy in Israel as well as to issue a call for an end to all religious rhetoric that inspires acts of hate and violence toward LGBT people,” Rabbi Josh Lesser (photo) says in a statement.

The gay rabbi from Congregation Bet Haverim will lead the event.

The tragedy moved Lesser, who issued a statement shortly after the attack.

“It is with immeasurable sadness and revulsion that I respond to the news from Israel that a masked gunman opened fire in the Tel Aviv LGBT center during a program for their youth. My community stands in solidarity with the community in Israel as our prayers go out to the victims and their families. We mourn the dead and pray for the physical, emotional and spiritual healing of all affected by this tragedy. May the memories of those who were murdered be honored by our call for justice and equality.

As we await justice in this case, as the gunman has yet to be apprehended, we also await a deeper justice in the world. While so many in Israel from all religious and political facets have decried this heinous act, we recognize that hate speech, particularly religiously inspired hate speech contributes to a climate where ungodly acts can be perpetuated in Israel, here in the United States and around the world. As a synagogue, we exist in part to demonstrate that part of our understanding of godliness in our world is through creating spiritual communities where LGBT people and straight people can live together with acceptance, love and justice. We ask that you stand with us to confront the hatred that exists in our societies that make tragedies like this one possible.”