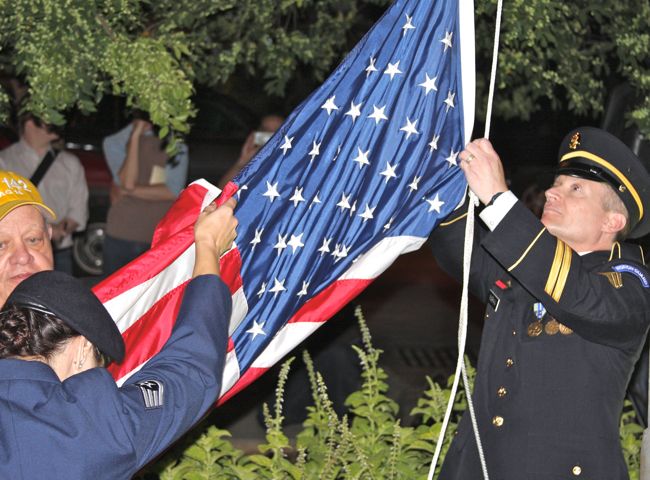 Several gay veterans – including two who served in World War II – joined a crowd of about 200 people in Piedmont Park on Monday to celebrate the end to the military’s “Don’t Ask, Don’t Tell” prohibition on openly gay soldiers.

The emotional “Retreat Ceremony,” which sometimes channeled the lingering resentment left in the wake of 18 years of the military ban, was organized by American Veterans for Equal Rights. The organization is led by Danny Ingram (top photo right), a longtime Atlanta resident who was one of the first gay people booted from the military under DADT after President Clinton signed it into law in 1993. Ingram was one of a handful of gay veterans from Atlanta who were on hand last December when President Obama signed legislation repealing the ban. The policy officially ended on Tuesday – after 14,346 men and women were discharged under it.

Obama said Tuesday that he was proud to repeal the military ban.

“As of today, patriotic Americans in uniform will no longer have to lie about who they are in order to serve the country they love,” Obama says. “As of today, our armed forces will no longer lose the extraordinary skills and combat experience of so many gay and lesbian service members. And today, as Commander in Chief, I want those who were discharged under this law to know that your country deeply values your service.”

Among the nearly two-dozen veterans attending Monday’s ceremony in Piedmont was Jeff Cleghorn, an attorney and veteran who has helped fight the ban and lobbied for its repeal. Cleghorn joined Ingram at the White House signing in December and organized an Atlanta event a month earlier that raised about $30,000 to fund repeal efforts. Cleghorn hosts a DADT Repeal Day event on Tuesday.

The event in Piedmont included performances by OurSong and Atlanta Freedom Bands. An honor guard of gay and transgender veterans helped lower and remove the American flag from the veteran’s marker at the park, which sits near the 12th Street entrance.