As LGBT activists in Atlanta gathered last week to celebrate the repeal of “Don’t Ask, Don’t Tell,” one transgender veteran repeated an oft-used military refrain to remind the crowd there’s still work to do: Leave no one behind. 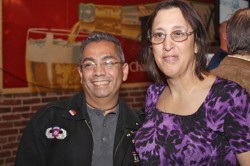 Monica Helms (photo right), founder of Transgender American Veterans Association, called on the activists and the long list of LGBT groups they represented to back transgender people in their efforts to serve openly in the military.

“This is a piece of legislation that affects all Americans and I am proud to be part of this celebration. But I am also here to let you know that we are still not done,” Helms said.

“Next year, when the implementation part is finished, I am going to hope that all of the organizations represented in here are now going to turn their attention to allowing trans people to serve openly in this military like they do in several of our allied countries,” she added.

“The other part of our work that is not yet done is that we’ve covered sexual orientation, but we know that gender identity and gender identification are critical to full equality in this country,” Graham told the rally.

On Dec. 22, President Obama signed legislation repealing the military’s ban on openly gay, lesbian and bisexual people during a raucous ceremony in Washington, D.C. attended by at least four Atlantans. But advocates of the repeal have warned gay troops that it may be months before the repeal of the ban is fully in place.

In a blunt warning to servicemembers, the Servicemembers Legal Defense Network says troops shouldn’t yet come out and hints that the path for transgender troops to serve openly is less clear.

At this time, lesbian, gay, and bisexual service members can still be investigated and discharged under DADT.

DADT remains the law until there is finality in the courts or until 60 days after certification, whichever comes first.