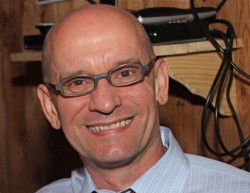 With a vote expected Tuesday on the repeal of “Don’t Ask, Don’t Tell,” gay Atlanta attorney and former Army major Jeff Cleghorn took to the airwaves to debate the measure with a retired general.

Cleghorn (photo) was featured in an on-air debate Monday on Fox 5 with former Marine Major General Larry Taylor. The segment came as the U.S. Senate is expected to take up the repeal of the military’s ban on openly gay members as part of a vote on defense legislation.

“The American people, from which military conscripts are recruited, overwhelmingly support allowing gays and lesbians to serve openly,” Cleghorn says during the debate.

Early Tuesday, statewide gay rights group Georgia Equality urged its members to call Republican Sens. Saxby Chambliss and Johnny Isakson and ask them to vote for the repeal of the ban.

But Republicans have threatened to block the vote and Chambliss has said that allowing openly gay people in the military would conflict with “the armed forces’ high standards of morale, good order and discipline, and unit cohesion.”