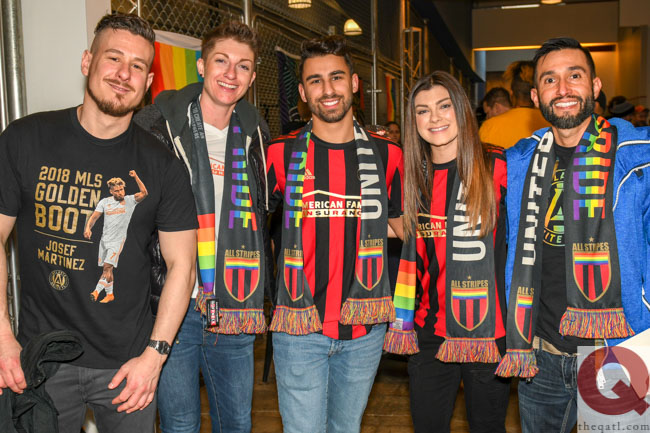 The MLS Cup Champion Atlanta United will recognize its diverse fanbase — including LGBTQ fans — with a blowout pregame party and Unity Night match on June 29.

But first, the team’s queer fan group All Stripes will hold a tailgate party before the June 1 match to ring in the month marking the 50th anniversary of the Stonewall Riots.

The tailgate will feature music, food by Las Margaritas and a raffle benefiting Soccer in the Streets, a non-profit that focuses on sports-based youth development. All Stripes put together a ticket block for the game, according to the group's president David Prophitt.

“We have over 75 All Stripes members confirmed for our ticket block for the June 1 Kickoff to Pride Party and expect well over 100 for our tailgate,” Prophitt told Project Q Atlanta.

Following the tailgate, United will take on the Chicago Fire at Mercedes-Benz Stadium. Tailgate tickets are $10 for members of the group and $15 for others.

The third annual Unity Night match follows on June 29, with a big pregame party in the Home Depot Backyard, which is the 11-acre tailgating greenspace where the Georgia Dome once stood.

“All Stripes is supporting the club’s pre-party in the Home Depot Backyard that has already sold hundreds of tickets,” Prophitt said.

The team will take on the Montreal Impact following the pregame party.

All Stripes has grown quickly since its founding in United’s inaugural season. The group is nearing the 400-member mark and has formally applied to become an official supporters group of the team. They have not yet received a response, according to Prophitt.

“Official or unofficial, we support the Atlanta United FC in its quest for a second MLS Cup in 2019 and will continue to gather LGBTQ+ and allied supporters to eliminate discrimination by engaging members of the LGBTQ+ community to create an inclusive atmosphere in the soccer culture,” he said.