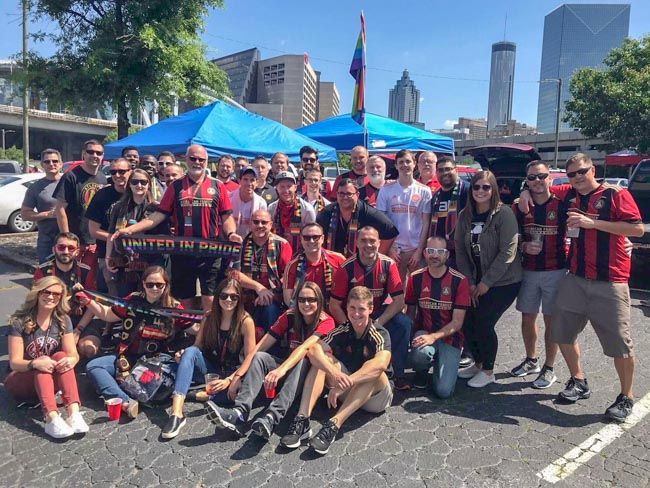 Atlanta United is recognizing its diverse fanbase with Unity Night during its June 24 match against Portland, with the team's LGBTQ fan group preparing for a big celebration.

All Stripes — the team’s rapidly growing LGBTQ and allied fan group — ramped things up for this year’s event, working with the club to reserve three sections of seats and hosting a pregame tailgate party in the Gulch outside the stadium with food, drinks, a live DJ, giveaways and special t-shirts from the gay-owned A Better Buzz Brand Goods. Following the tailgate, the LGBTQ crew will march en masse to the stadium to claim their rainbow flags and head to the special All Stripes sections, which total nearly 800 seats.

“I would argue that LGBTQ discrimination and stigma still exists in sports in general and in Major League Soccer,” Prophitt said. “It was a big deal for Robbie Rogers to come out on the LA Galaxy team, and now that he is retired, there are no out MLS players.”

Prophitt also referenced an incident last season in which Atlanta United fans yelled anti-gay chants at opponents during a match at Bobby Dodd Stadium. The team denounced the fans and offered a replacement for the chant.

“Unity Night is going to be about all supporters groups coming together to show the fanbase that while we have many differences, we should respect and embrace those differences,” Prophitt said. “All Stripes is also making the day a Pride celebration with two goals in mind: One, show the larger Georgia community that there are hundreds of LGBTQ soccer supporters and it is OK to be LGBTQ and love soccer as a player or a fan; and two, throw a big tailgate party to celebrate Pride complete with a DJ, food and drinks.”

A tradition is born

Prophitt didn’t know what interest LGBTQ friends would have in going to United games once he scooped up a pair of season tickets last year.

“During Atlanta United’s inaugural season, I started seeing dozens of my 1,300 Facebook friends checking in to Bobby Dodd stadium,” he said. “I told my friends I thought it would be fun to start an LGBTQ supporters group.”

Gay Atlantans Nick Jones, Ben Nicoara and Sean Thomas Ellis loved the idea and became co-founders of the group along with Prophitt, creating a website and Facebook group, having group meetings to keep them on track and contacting venues to set up away game watch parties. Woofs hosted the first of those in August. At home games, they tailgated together and started a tradition of meeting at one of the bars in Mercedes-Benz Stadium at halftime for a drink and a group photo. They ended the year with more than 200 Facebook members and 40 paid members, but wanted to take it to the next level in year two.

“In the last three months, we have grown to over 500 Facebook members and 200 paid members with an All Stripes event for every game. We have also established two charities we will be supporting this year: AIDS Walk for Jerusalem House and Athlete Ally that advocates for LGBTQ inclusion in sports,” he added.

The group also plans to formally incorporate and seek official Atlanta United supporters group status by year end. Atlanta United has just four formal partnerships with supporters groups, all of whom Prophitt said have been supportive of All Stripes. The groups have welcomed the LGBTQ group to their tailgate parties, offering advice and encouraging them on social media. And perhaps sometime soon, All Stripes will officially join them, further cementing the soccer-mad LGBTQ fans into the fabric of a soccer-mad city.