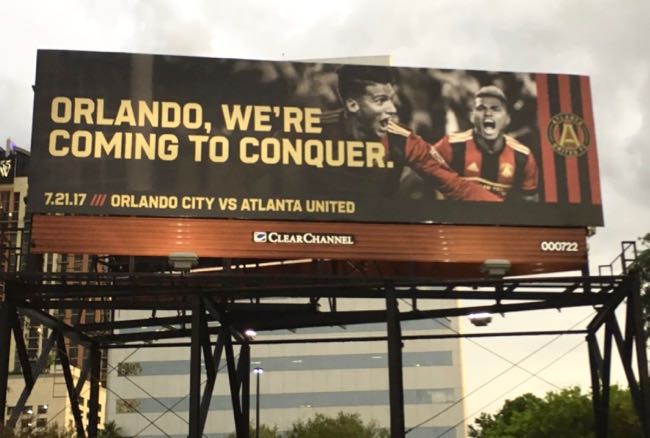 Atlanta United fans invoked the Pulse gay club massacre in taunts aimed at Orlando City Soccer Club supporters ahead of the match between the two professional soccer rivals on Friday.

One fan promised that Atlanta United would “destroy” the Orlando squad when the teams meet, with another fan responding, “think of it as PULSE part 2.”

Some 50 people were killed and dozens more injured on June 12, 2016 when a gunman opened fire inside Pulse, an LGBT club in Orlando. Two of the people killed in the attack had ties to Atlanta.

The hateful taunts came as Atlanta United did its own trash talking, placing a billboard in downtown Orlando that said, “Orlando, We're Coming To Conquer.”

The billboard generated controversy in Orlando even before Atlanta United fans crossed the line. It was put in place Tuesday and gone within 24 hours. Atlanta United said it was intended as a short term poke by the club, but Orlando Weekly noted that the billboard was vandalized.

At Atlanta United's home opener in March, the team denounced fans inside Georgia Tech's Bobby Dodd Stadium that yelled anti-gay chants at opponents during the match against the New York Red Bulls. Atlanta United then offered a replacement for the anti-gay chant. Scores of LGBT fans attend the team's sold-out home matches.

On Wednesday, Atlanta United again denounced fans who crossed the line in a statement provided to WSB:

As has always been our policy, Atlanta United strongly condemns the use of offensive or derogatory language under any circumstances. Our club is committed to providing a positive and inclusive environment for all fans. Insensitive or disrespectful comments are well outside the bounds of friendly competition, are harmful to the spirit of the game and have no place in our sport or our communities.

The teams play at 7 p.m. at Orlando City Stadium.

Banter is banter, if you want to go there with Pulse or any form of hate speech you won't be the first or the last I've “made famous”.

Where that billboard at tho? �� pic.twitter.com/uV3PC8yUTU