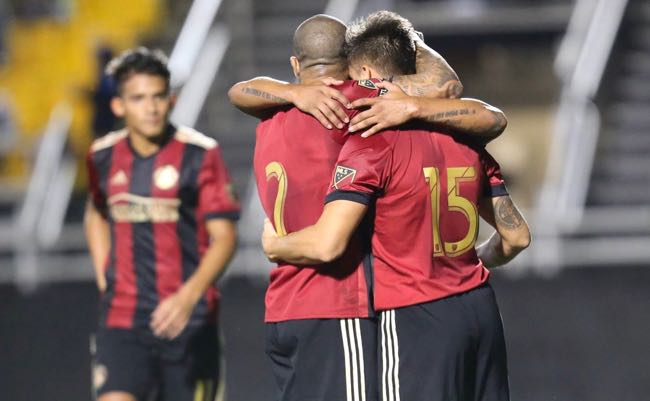 Atlanta United denounced fans that chanted an anti-gay slur during the team's home opener earlier this month. Now, the professional soccer franchise is offering an alternative.

And more beer lines. More on that later.

But to combat what the Major League Soccer franchise called “offensive language” and “inappropriate chants,” team officials this week turned to Atlanta-based Outkast for an alternative. So when Atlanta United plays Chicago Fire on Saturday at Bobby Dodd Stadium, replace “puto” with “hey ya!” as the opposing goalkeeper approaches the ball for goal kicks.

After a few of the more than 55,000 people who attended the inaugural game two weeks ago used a homophobic chant during goal kicks , the MLS expansion team is asking those in attendance for the remaining games to say “Heeeyyy!” as the goalkeeper approaches the ball, and “Ya!” as he kicks the ball. “Hey Ya!” was released in 2003 as part of the album Speakerboxxx/The Love Below. The song was nominated for two Grammys, and won several other awards.

Also, more beer – which is much needed after concession stumbles during the team's March 5 opener. That might not help quiet drunk fans with their anti-gay chant. But it will help the rest of us deal with the insufferables.

The MLS expansion team said that the number of hawkers inside the stadium will more than double, with as many as 10 more portable food and beverage locations throughout the stadium. Outside of the stadium, food choices will now include Sonny’s, Twisted Taco, Smash Burger and Chick-fil-A, among others.

The cutoff for alcohol sales will be moved from the 65-minute mark to the 75-minute mark with an undisclosed amount of locations added in an attempt to decrease the wait time in lines. Tech will reserve the right to change the cutoff time. Additionally, the number of pourers and will increase by 50 percent. Atlanta United declined to say exactly how many will be added.