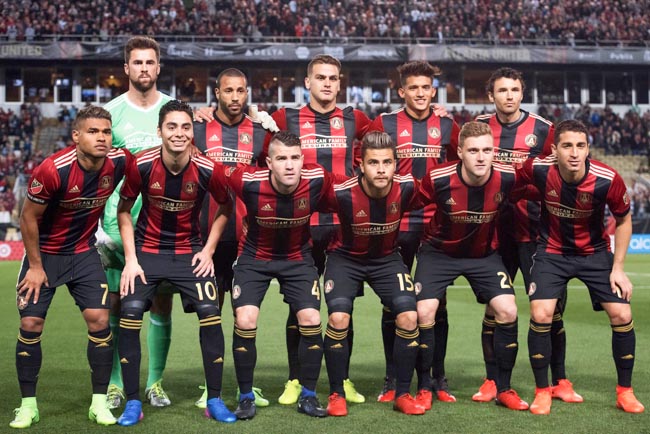 Atlanta United came out swinging against fans who yelled an anti-gay slur at opponents during the professional soccer team’s home opener in Midtown on Sunday.

The Major League Soccer franchise said it would eject fans from future matches if they take part in calling opposing players “puto” as they reportedly yelled during goal kicks taken by the New York Red Bulls.

“Atlanta United does not support or condone the use of offensive language. We strive to foster a positive, enthusiastic and inclusive environment for all fans, and inappropriate chants have no place at our matches. Fans found to be participating in this behavior will be subject to removal from the building.

The inaugural match was televised nationally and more than 55,000 people packed into Bobby Dodd Stadium at Georgia Tech to watch. The diverse crowd included scores of LGBT fans and was the fourth-largest crowd in the world for a soccer game over the weekend.

The chant has an unfortunately rich tradition in professional soccer and is often used in games in Mexico. It caused problems during the 2014 World Cup. Some soccer diehards argue that it’s not a gay slur. But it is. Via Outsports:

¡Puto!,” many of Mexico's supporters chant laughingly during goal kicks by the opposing team's goal keeper. The word is slang for “fag” or “man whore” or “coward.” Some say its use in soccer is a cultural phrase that means cowardly and is not directed at gays, but the meaning is clearly designed to mock the opponent as weak and unmanly.

To bring it home to Georgians, defending “puto” ranks right up there with defenders of the Confederate flag. Via Outsports:

Since the chant is once again becoming news, I asked Andres Aradillas-Lopez, an economics professor at Penn State who was born and raised in Mexico and still follows El Tricolor, to explain again why puto is a slur. For the record,  Aradillas-Lopez is not gay. Here is his reply:

“Another international soccer tournament, another opportunity for Mexican soccer fans to showcase their ugly 'puto' chant to the world. Concomitant with this come the apologists who claim that this chant has nothing to do with homophobia. Their argument is that 'puto' in a wide sense simply refers to someone who suffers from a 'lack of manhood' but not necessarily gay.

“What they omit to say is that 'puto' has always been a derogatory term used against gay men and, therefore, is a gay slur. In the macho universe, gay men are a subset of the universe of 'putos' (I would like them to tell me why, then, do they not chant 'puta' at women's soccer games).

“This defense of the 'puto' chant is as weak as the defense of the Confederate flag as a symbol of heritage and not of racism: 'This flag honors my ancestors' or 'This flag was used in the Dukes of Hazard, a lighthearted, fun TV show.' As clear as it is that the Confederate flag is a symbol of racism, the word 'puto' stands for a gay slur and the reason, in both cases, is very simple: The person waving that flag or chanting that word does not get to decide the meaning of those symbols. It is the groups who have been VICTIMIZED by those symbols who get to decide.

Atlanta United and the Atlanta Falcons share an owner – Arthur Blank. And while the Falcons sometimes ask inappropriate gay questions, Blank has made it clear his businesses won’t abide by anti-LGBT shenanigans. Blank has called for pro sports to make gay athletes “part of our culture” and last year, the Falcons joined other businesses in metro Atlanta that opposed anti-LGBT “religious freedom” legislation passed by the Georgia General Assembly.

After Sunday’s opener, the team also pledged to improve the fan experience. Long wait times greeted fans trying to enter the stadium and the massive crowd overwhelmed concession lines and caused jams throughout the cramped stadium. The team moves its homes games to the new, expansive Mercedes-Benz Stadium in late July.