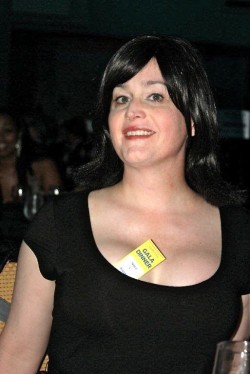 Lambda Legal on Monday continued its fight on behalf of a transgender former employee of the Georgia General Assembly who was fired from her job after announcing her transition from male to female.

The gay legal group, which filed suit for Vandy Beth Glenn in July 2008, this week filed papers with the 11th Circuit U.S. Court of Appeals defending their win last July when U.S. District Court Judge Richard Story ruled that the firing was illegal and that her employer violated the Constitution and discriminated against her for failing to conform to sex stereotypes. The court rejected Lambda’s second claim that Glenn was discriminated against on the basis of her medical condition.

The state later appealed the ruling.

“I am resolved to see this case to the end. No one should be fired for no good reason like I was,” Glenn (photo) said in a prepared statement.

“We’re looking forward to making our case at the Eleventh Circuit. It is clear Vandy Beth Glenn was fired because her boss didn’t like her as she is. That is unfair and illegal,” Nevins said in a statement announcing the appeal. “The law is on our side here, but transgender employees are still vulnerable to sex discrimination from their employers who don’t understand it.”

“I hope big recognition like this for injustices in the workplace will do more to correct the other injustices in the future. Transgender people are fired every day in the U.S., and most don’t have legal experience and recourse that I have. I accept this award humbly on their behalf,” Glenn said during the dinner.

In 2009, Glenn testified during a Congressional hearing on the Employment Non-Discrimination Act.