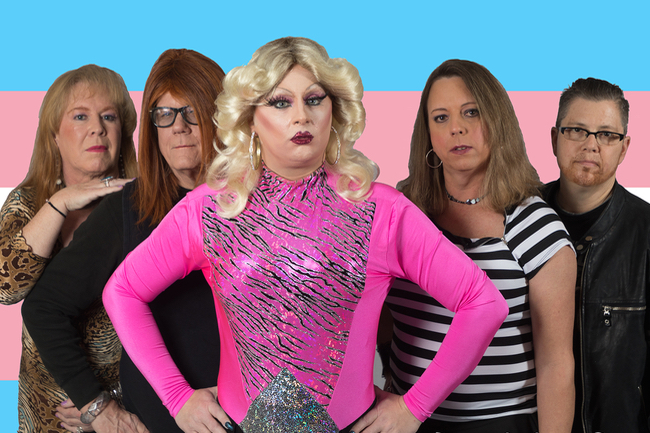 At its best, Music is inclusive, inimitable, transcendent and constantly bringing people together. Atlanta-based, all-transgender band, Exquisite Gender, is out to be just that. We meet them as the band prepares to take a bow for the first time to benefit a bigger cause than themselves.

Although the band is a new name on Atlanta’s music scene, its members are all accomplished artists in their own right. Of the bunch, musician Bucky Motter may be the best known to local audiences for decades on local stages. He does the honors on guitar and vocals for this band.

“Exquisite Gender came to fruition as an effort to play a transgender event, that unfortunately did not happen,” Motter explains. “However, we kept practicing and working hard and realized that if you build it people will come, so that brings us to our official debut at Out Front Theatre.”

On February 23, the band headlines an Out Front Theatre concert benefitting The Joan Garner/GA Equality AIDSwatch Scholarship Initiative. Proceeds are earmarked to provide funds for members and allies to attend AIDSwatch 2018.

“I’ve known Jeff Graham of Georgia Equality for a very long time,” Pfeiffer says. “I was speaking to him about possibly playing at any of GE’s upcoming events, and he suggested the AIDSwatch initiative.

“I also am friends with Paul Conroy, Out Front Theatre’s founder, and he was more than happy to accommodate us for the fundraiser,” she adds. “It is all for a wonderful cause, and that is how our massive debut came together.”

At the show, Exquisite Gender plans to bring a few songs from legendary, renowned Broadway musical Hedwig and the Angry Inch to life, as well as other covers and some original music.

“You know everyone loves Hedwig and those fantastic songs,” Motter says. “What better way to get the party started than to perform a couple of them?” exclaims Bucky.

And expect a show, not just a concert.

“It is going to be a full-on, dynamic production,” Motter adds. “Syndelle will be doing multiple costume changes, seven I think. Syndelle is our entertainer. She has a few surprises up her sleeve.”

Singer/songwriter and guitarist Cathleen Thomas, known for her jazz and classical influences and her fingerstyle guitar skills, opens the event with a half hour set.

As for the band’s future, all doors are open for what could come next, and the band is confident that Exquisite Gender is a force to be reckoned with.

“Between all of us, we have years of experience. We all bring something unique to the table. Whether we are on stage or just in rehearsals, it’s magic.”

Exquisite Gender debuts at Out Front Theatre on February 23 at 8 p.m. Tickets are $10 at the door or in advance online at georgiaequality.org. Visit facebook.com/Exquisitegender, and download Motter’s latest solo EP on iTunes.

This article originally appeared in Q magazine. Pick up your hard copy around town, and read the full issue below: