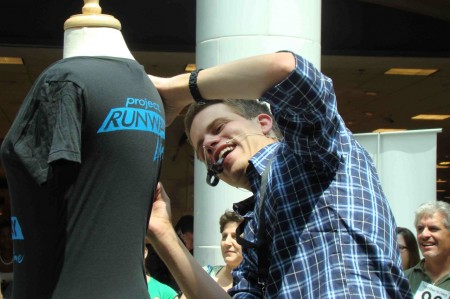 Ok, ok. You probably can’t swing an iPod around the gym without hitting a queen who isn’t planning on watching the premiere of “Project Runway” on Bravo Lifetime tonight.

But the show’s got even greater appeal to fans in Atlanta this season, thanks to contestant Mitchell Hall, a gay Savannah resident who escapes to Atlanta on occasion. There’s also Atlanta fashion designer Mychael Knight, the season three finalist who appears on “Project Runway: All Star Challenge.” That two-hour special precedes the debut of season six tonight. (“All Star Challenge at 8 p.m.; “Project Runway” at 10 p.m.)

And Hall is featured on the current cover of David magazine, telling the glossy that he’s one of several openly gay members of the 16-person cast this season, but probably the only one that is red-green colorblind.

“Because of that I only use a neutral palate,” says Hall, who adds that being colorblind is one of the biggest challenges he’s had to overcome as a fashion designer.

“In art school it was the hardest thing,” he says. “One of our first classes in the first year of school is called ‘Color Theory’ and you’re making color charts — adding grey, adding white, adding black and how it affects color. It was very difficult.

“With the access that I have to fabrics here in Savannah, it just ended up looking higher-end when it was in that neutral color palate,” Hall says.