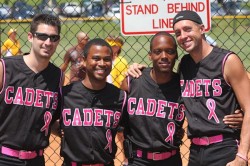 So much for the hopes of the eight men’s teams of the Hotlanta Softball League that spent a week in Ohio earlier this month chasing a Gay Softball Word Series title. A three-year drought continues.

An Atlanta team hasn’t nabbed a title since two took crowns in 2007. The eight HSL teams that chased that dream to Columbus, Ohio on Aug. 17-21 — Venom, Sluggers, Hitmob, Crew, Avengers C, Wet Demons, Pink Cadets and Avengers D — all fell short when the titles were doled out. Atlanta teams didn’t even place in the top three of any of the four divisions competing for titles.

In the A Division, the L.A. Vipers — which routinely win World Series crowns — were named co-champs with the Orlando Force, Dallas TKO won in B, Austin Shady Ladies took the C title, and the Boston Ramrod Machine won D.

Now it’s up to the women: Two of HSL’s women’s teams—Gamma and Gamma Lite—head to Las Vegas in early November for the ASANA Softball World Series.