A funny thing happened on the way to “Wicked’s” expected Tony Awards romp in 2004. The scrappy little “Avenue Q” stole the spotlight and the top award for Best Musical. The show returns Tuesday with a little something extra for gay Atlanta.

During the run through Sunday at Cobb Energy Center, your ticket to “Avenue Q” can benefit Postive Impact, Atlanta’s HIV/AIDS support and mental health agency. Get a $5 discount by entering the promotional code IMPACT, and $5 of your purchase price goes to the organization. 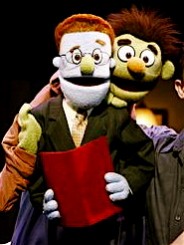 An adult takeoff on “Sesame Street” intermixing human characters and puppets, “Avenue Q” (photos) looks at life far from the glitzy streets of Manhattan. The characters in the outer borough of “Avenue Q” include Princeton, fresh out of college; Rod, a Republican who is gay and thinks no one knows; and Rod’s roommate Nicky, whom he has a crush on.

Some of the “Avenue Q” original crew are openly gay: Jeff Marx co-wrote the music and lyrics, Jeff Whitty wrote the book, and Jason Moore directed. Some of the crew worked on “Sesame Street” as well.

Michael McAssey is the tour’s musical director. He started last August and has been with the show for a year. He first saw the show a week after it opened and fell in love.

“When I saw it, I couldn’t believe it,” he says. “It’s one of the funniest things I’ve ever seen.”

Like most people, he saw it again – four more times.

As a gay man, he connected with the show’s themes, McAssey says.

“I love the overall theme of acceptance in the show,” he says. “There’s a place in the world for everyone, and everyone has troubles, no matter what ethnicity. Humans are people. Something may suck now, but it will get better.”

Among the notable songs in “Avenue Q” are “If You Were Gay,” where the other characters reveal they would accept Rod if he came out, and “Everyone’s a Little Bit Racist,” which looks at how each of the characters discriminates, voluntarily or involuntarily.

“Avenue Q’s” 2004 triumph over the more-hyped “Wicked” was considered an upset, especially since the Tony committee can eschew edgy over commercial. Yet despite the fact that the show won the Tony, McAssey still runs into people on the road who’ve never heard of it or seen it. “It’s a different audience every night,” he says. “I like watching the reactions of people who have never seen it and seeing how long it takes for them to get into it.”

“Avenue Q” opens Tuesday and runs through May 23rd at the Cobb Energy Centre. Get a discount and benefit Positive Impact, by entering the promo code IMPACT on ticketmaster.com, and read more about Positive Impact.