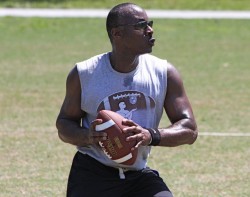 The Atlanta Storm finished in the middle of the pack at Gay Bowl IX, falling short of the gay flag football team’s expectations of making a run at the championship.

The team, comprised of players from the National Flag Football League of Atlanta, spent last weekend in Washington, D.C. with 19 other teams chasing the Gay Bowl IX title. They hoped to bring home a championship for the first time, but finished 10th — about the same place they ended their championship run in 2007 and 2008.

The Los Angeles Motion went undefeated during the tournament to take the title, its third in nine years. Atlanta hasn’t won the championship, but came close in 2005 when they lost to the Chicago Flames in the title game.

“Competition at the tournament, since we hosted in 2004, has taken on a new meaning. The games are physical; players faster, smarter and the QB’s are more athletic and game smart,” Williams says.

He adds that the local league, which plays again next spring, helps bring people together regardless of skill level. But teams in the tournament are more competitive and creating rosters packed with younger, faster and better athletes, so the Atlanta league will reevaluate how it assembles its tournament team to take advantage of its growing depth.

“Our league is of a different pace and speed versus the tournament. NFFLA is about bringing sports-minded folks who enjoy the game together regardless of skill level, while the tournament is about leveraging your hometown talents to compete against some of the best from around the country. Teams are getting younger, taller, and faster, so Atlanta will do the same to ensure we remain competitive and get back to the championship game,” Williams says.

Gay Bowl X will be held over Columbus Day Weekend in October 2010 in Phoenix, Ariz.