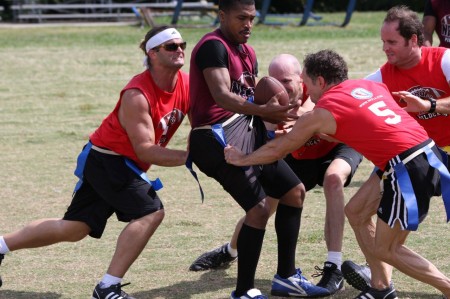 When it comes to expectations, the Atlanta Storm sets them pretty high.

The team, comprised of players from the National Flag Football League of Atlanta, jetted off to Salt Lake City last weekend to join 18 other teams from across the country competing for the Gay Bowl VIII title. They had their sights set on bringing home a championship for the first time.

But turnovers and execution that sometimes fell flat hurt the team and left them in ninth place on Sunday, watching as the New York Warriors claimed the title for the third consecutive year.

“It went well, but it just didn’t go well enough,” says Thurman Williams (photo), a Storm player and the NFFLA’s president. “It’s about the execution and no mistakes in this game. It’s things that you don’t execute at the right time that can kill you and they did.”

The Storm took ninth for the second year in a row. The team hoped to make a run at the championship, which it did in 2005 when it lost in the final game. But despite the finish, Williams says the team benefited from the championships and from having a second team – the Atlanta Heat – also take part.

The Storm opened the tournament on Oct. 10 with a win, thanks to a forfeit by a team that didn’t show. They dropped their next game against Salt Lake City Ex-Communicated 26-21 during a last-minute play.

On Saturday, the Storm lost to San Diego but rebounded on Sunday with a win in the snow over the New York Bad Apples to claim ninth place. The Heat didn’t win a game and placed 19th.

“The snow was probably about three or four inches. When you are playing, you don’t care. But when you come off the field, you are freezing,” Williams says.

The Storm’s defense was a strong point during Gay Bowl VIII, Williams says, but offensive turnovers hurt the team. And their ninth place finish left them looking forward to next year.

“We’ve been there and a lot of folks have tasted it and fell short. There is a little bit of hunger,” Williams says. “We spend a lot of time visioning what we want to happen as a team.”

The flag football league returns to action on Thursday at Mozley Park. Games begin at 7 p.m. and the league’s fall season continues into November.