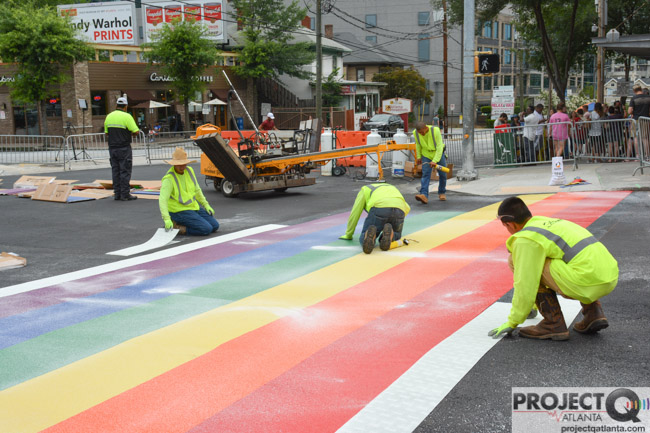 That permanent splash of gay pride at the intersection of 10th Street and Piedmont Avenue in Midtown came with a cost. The city spent $196,000 to install rainbow crosswalks over the July 4th holiday weekend.

The price tag includes a year of maintenance and upkeep from contractors before the city's public works crews take responsibility for them next year, city officials said. City crews will be responsible for pressure washing the crosswalks as they get dirty from vehicles and staging all those selfies from gay Atlanta fans.

The rainbow crosswalks are also expected to last 10 years, years longer than the temporary ones installed in the same intersection in 2015 for the Atlanta Pride celebration. Those crosswalks – funded by nearly $45,000 in donations – were in place for about a week after a lengthy back-and-forth over whether they could be installed permanently.

“The initial cost to install the crosswalk is approximately $196,000,” Jenna Garland, press secretary for Mayor Kasim Reed, said in an email statement to Project Q Atlanta.

“The life expectancy of the crosswalk is 10 years. Our contractor will make any necessary repairs, including normal wear and tear updates, as part of the warranty for the first year at no charge,” Garland added.

Georgia Voice first reported the cost and other details of the permanent installation on Monday.

Reed announced on June 12 – the first anniversary of the Pulse massacre in Orlando – that rainbow crosswalks would be added permanently to the intersection. An online petition urged the city to move forward on the project earlier this year.

Atlanta now joins the likes of San Francisco, Seattle, Key West, Philadelphia, Toronto and other cities that have rainbow crosswalks. But not everyone is pleased – haters trolled the comments of a Georgia Voice video of the installation. The clip went viral and has since generated more than 2,300 shares, 4,200 comments and 275,000 views.