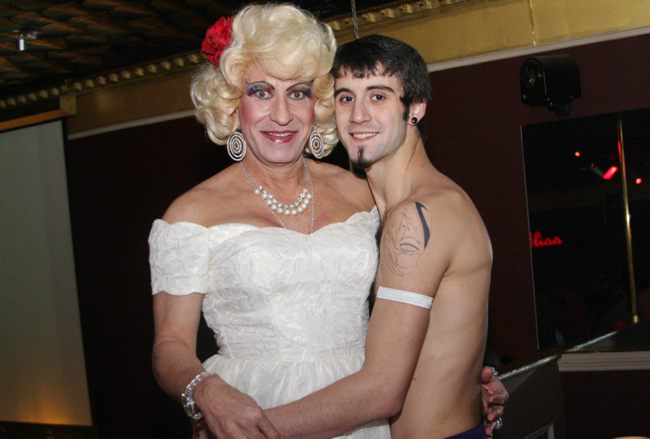 Gay strip club Bliss Atlanta, which avoided a legislative wrecking ball last month, avoided a legal one, too. Now they can show their junk and work their stripper poles without worry of closing. Or the anti-gay bias they claimed caused their troubles.

It only cost them two years of legal wrangling with the city, $75,000 in fines and $15,000 to pick up the city’s legal costs, according to the Daily Report. No word if Bliss is paying in singles.

Although the club swapped chicks for dicks in 2011, its lady problems persisted for two years. In 2009, the bar – then known as 24K Club – was raided by Atlanta police. It seems the place openly flouted city regs requiring that dancers be permitted. Theirs weren’t, the club was cited, its liquor license renewed and the lap dances continued.

Until 2011. That’s when owners turned 24K Club turned into Bliss, pushed for a gay crowd and somehow got caught in the crosshairs of the city’s byzantine License Review Board. More likely, neighbors who don’t care for clubs anywhere near their homes. So the bar cried anti-gay wolf and sued. Twice.

The suit said the city had targeted Bliss “based on an animosity toward Bliss Atlanta and all-male, nude-dance entertainment targeting a predominantly gay audience” and “purposefully discriminated against Bliss Atlanta by declining to order similarly situated venues which have violated the City's alcohol ordinance to appear before the LRB.”

As the suits progressed, Bliss kept its liquor license thanks to a city sensitive to the political and legal fallout over that other gay bar raid. And then City Council member Alex Wan launched his effort to push some of Cheshire Bridge’s sexy parts off the strip. The controversial rezoning, which failed in June, would have forced Bliss out. The club’s attorneys took notice.

Asked whether a push over the past couple of years by Atlanta City Councilman Alex Wan and members of the Neighborhood Planning Unit that represents Cheshire Bridge Road to drive adult businesses out of the area might have played a role in his client's troubles, Wiggins said he thought it possible.

“I find the timing and the nature of the revocation effort highly suspect, especially given that another strip club operating at another part of town with just as many revocations involving just as many dancers resulted in no action being taken against the club,” he said.

That other club? Swinging Richards, the gay strip club that’s had recent run-ins with neighbors.

But how about that gay bias? Bliss couldn’t prove it. So they settled the lawsuits and the city will keep its liquor license in place.

Now let’s get nekkid! Just not with this faggot-hating stripper.