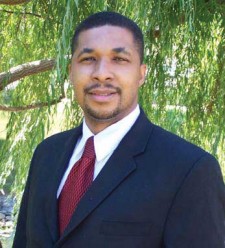 A professor who was fired by Atlanta’s Interdenominational Theological Center says the local consortium of black seminaries discriminated against him for being anti-gay and for distributing a book against homosexuality. Jamal-Dominique Hopkins (photo), a Dead Sea Scrolls expert, was hired by ITC in 2008 and was promoted to associate professor of New Testament in February. A board member of the National Black Evangelical Association, he founded and directs the J.D. Institute, an evangelical think-tank. Hopkins says everything was fine at ITC, which trains primarily African-American clergy in protestant tenants, until he organized an informal discussion group in February after his promotion. The event included passing out author Robert Gagnon’s book “The Bible and Homosexual Practice,” which holds up Leviticus and the like as proof that homosexuality is a sin. It was then that Hopkins’ boss, department chair Margaret Aymer, grilled Hopkins over the use of the book and then threatened his job, according to a complaint Hopkins filed with the Equal Employment Opportunity Commission. That was February. Hopkins contract was not renewed and he filed the EEOC complaint in July, according to Religion News Service.

He accused ITC administrators of harassment that included “disagreeing with my conservative religious ideals, intimidating me, slandering my character, giving me poor evaluations, and changing student grades from failing to passing with no merit.’’

ITC President Ronald Peters refuted Hopkins’ claims in the consortium’s only response on the issue on Aug. 8.

“The reality is that the non-renewal of Dr. Hopkins’ contract had nothing to do with academic freedom or any efforts to infringe thereon,’’ Peters wrote. He added that Hopkins’ claims are “disappointing remarks of a disgruntled former employee and are a misrepresentation of fact.”

Hopkins’ father, attorney Joe C. Hopkins of California, is representing his son and said a suit could be filed if EEOC negotiations cannot resolve the case. In the meantime, conservative Christian critics jumped on Hopkins’ bandwagon and ripped the ITC as backing a “harlot church” that “infects young people with unbiblical ideologies which are supported by the global, God-less church of religion and culture.” For its part, ITC says it welcomes students to embrace “a liberating and transforming spirituality; academic discipline; religious, gender, and cultural diversity; and justice and peace,” according to its website. Even if that means that pro-gay religion is on the menu and that’s what really lost Hopkins his job, Hopkins should look at the case of Augusta State student Jennifer Keeton before filing suit. Keeton, too, became a martyr for religious conservatives when she sued her school based on the thought that her religious beliefs trumped her school’s gay-inclusive policies of equality and diversity. Keeton lost that battle three times in court. Hopkins photo via Religion News Service