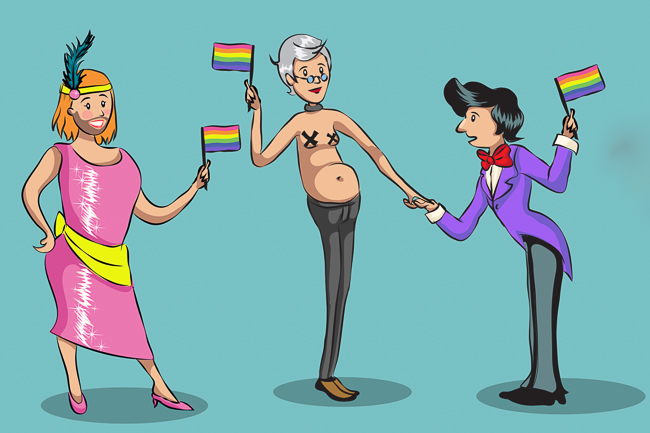 Leaders from Out On Film, Out Front Theatre Company, Atlanta Freedom Bands, Atlanta Philharmonic Orchestra, Our Song and Voices of Note — which is the umbrella for Atlanta Gay Men's Chorus and Atlanta Women's Chorus — met last week, according to a press release on Friday.

When Atlanta's newly elected, and only LGBTQ, city council member Antonio Brown left out queer arts organizations and any queer artists from his Stonewall honors last month, that was the last straw for arts organizations not getting their due, says Out On Film Director Jim Farmer in the press release.

“For an elected official and member of the local LGBT community to exclude us – especially during a Stonewall Month when many of us held multiple events — is sad,” he says in the press release. “It may seem like a harmless omission but it is a noticeable slight – and it sends a message. We all hope that the creation of this new group will bolster the work we do as well as the importance of arts culture in our society.”

Farmer tells Project Q that it's particularly glaring since most of the organzatons have such a rich history.

“All of these organizations work throughout the year serving our community and helping create inclusive environments — and two of them have been doing so for more than 30 years,” he says. “Part of why we have formed the group is to tell our stories and highlight some of the challenges we face.”

Look for more from the newly founded Atlanta Queer Arts Alliance, aka AQAA, soon, he adds.

“The group's mission is to to promote the value of cultural experiences in the area, find additional ways to collaborate with each other and provide space for LGBTQ artists,” Farmer says. “We will be having some joint collaborations soon and a fundraiser/event for us all sometime later this fall or early next year.”

Here is Friday's announcement in full:

The group held its first meeting July 10 with the goal to increase efforts to enhance their own and each other’s work, to promote the value of cultural experiences and find additional ways to collaborate with each other and provide space for LGBTQ artists.

“The arts play a significant role in the Atlanta economy and the Atlanta LGBT community,” says Jim Farmer, festival director of Out On Film. “For an elected official and member of the local LGBT community to exclude us – especially during a Stonewall Month when many of us held multiple events – is sad. It may seem like a harmless omission but it is a noticeable slight – and it sends a message. We all hope that the creation of this new group will bolster the work we do as well as the importance of arts culture in our society.”

Members of the Atlanta Queer Arts Alliance will look for opportunities to work together on joint events and fundraisers. More information on specific events will be announced soon.

Now in its 38thyear, The Atlanta Gay Men’s Chorus most recently performed their acclaimed “Stonewall” concert in Hendersonville, North Carolina as part of that city’s inaugural Pride event well as in Atlanta.

The 70-member Atlanta Women’s Chorus has been around for seven years and performed their “Legendary!” concert in June and “Nature’s Voice” in March.

OurSong, the Atlanta Gay and Lesbian Chorus, has been around for more than 15 years. In addition to a Stonewall event on June 14 and 15, OurSong has also performed in Europe, twice with the Atlanta Symphony Orchestra and had members perform at Carnegie Hall on the eve of the anniversary of Stonewall.

Atlanta Freedom Bands, started in 1993, appears in the concert hall and at some of the city’s largest public events all through the year with performances from its Concert Band, Marching Band, Color Guard, and MetroGnomes Stage Band.  This June, AFB presented a “Stonewall 50 Celebration Concert” with two world premieres and represented the city at the 10th annual Augusta Pride celebration and in the World Pride/Stonewall 50 March in New York.

Founded in 2004, the Atlanta Philharmonic Orchestra is an all-inclusive orchestra and the fifth LGBTQ+ orchestra created in the world.  The APO closed out its 14th season, titled “Transformations,” in June chronicling Broadway musicals and will be celebrating its 15th season this fall.

Out Front Theatre Company is one of the nation’s only LGBTQ theater companies. Not only does Out Front stage their own work, but is known throughout the LGBTQ community as a warm and welcoming venue for other organizations to showcase their work.

Out on Film has been around for 32 years and is one of the oldest and largest LGBTQ film festivals in the country. From late May to mid-June, Out on Film held 11 local events centered around current and classic films.

Keep an eye on Project Q Atlanta for developments and activities from Atlanta Queer Arts Alliance.