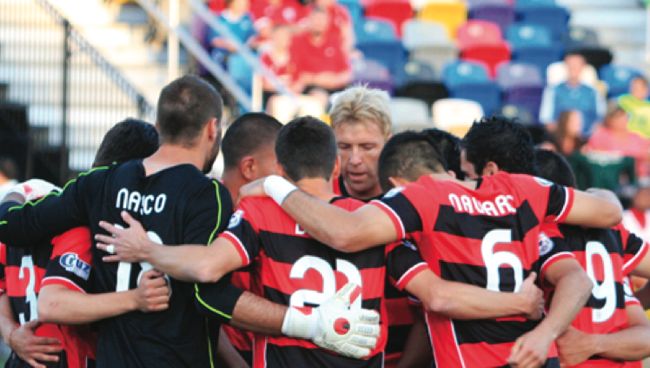 Gays love their pro jocks, right? Right. And now, increasingly among Atlanta's pro sports franchises, they love us back. The latest is the Atlanta Silverbacks, who host an LGBT Pride Night on June 22, just four days after the Atlanta Braves.

The soccer franchise announced its first-ever LGBT Pride Night as it also embraced equality in the sport and offered unequivocal support for combating homophobia and transphobia through Athlete Ally, a non-profit group that encourages tolerance in sports.

“As a global sport, soccer knows no boundaries,” Silverbacks General Manager Andy Smith says in a prepared statement released on Thursday. “No matter your race, sex, religion, or sexuality, soccer is and always should be open to everyone.”

For the team's LGBT Pride Night, the Silverbacks host the Tampa Bay Rowdies.

The LGBT Pride Night comes during a packed Stonewall Month celebration that includes the second Out in the Stands with the Atlanta Braves on June 18. (View photos from 2012.) That event includes a pre-game reception with former rugby jock Ben Cohen, who combats homophobia in sports through his Atlanta-based Standup Foundation. Billy Bean, a former Major League Baseball player who came out after retiring, will also attend the event. Bean is vice chair of StandUp.

The full statement from the Atlanta Silverbacks:

The Atlanta Silverbacks took a stand for gay rights this week, publicly announcing their support for all athletes, especially soccer players, regardless of their sexual orientation, gender identity, or gender expression.

“As a global sport, soccer knows no boundaries,” said Silverbacks General Manager Andy Smith. “No matter your race, sex, religion, or sexuality, soccer is and always should be open to everyone.”

Members of the Silverbacks team, coaching staff, and front office pledged their support to several organizations whose missions are to promote equality and gay rights in sports. One organization that Smith, head coach Brian Haynes, technical director Eric Wynalda, and other members of the Silverbacks family pledged their support to this week was Athlete Ally.

“Soccer is a sport for everyone, and Athlete Ally does a great job of proving that,” Wynalda said. “I’m all for supporting this cause, and I’m glad our organization is taking a stand.”

Based in New York, Athlete Ally was formed in January 2011 to educate, encourage, and empower straight and LGBT athlete allies to combat homophobia and transphobia in sports. LA Galaxy midfielder Robbie Rogers, who is a member of Athlete Ally’s advisory board and an ambassador for the organization, recently became the first openly gay man to play in a top North American professional sports league. The U.S. international announced his retirement and came out as gay in February after playing nearly eight professional seasons in the U.S., Holland, and England. After the outpouring of support he received following his announcement, he decided to return to the playing field with the Galaxy.

Rogers’ courageous announcement sent a message throughout the professional sports world, especially the soccer community. To the Silverbacks, it was an important message to support.

“What Robbie Rogers did was very brave, but nobody in professional sports, or anywhere for that matter, should have to fear acceptance based on their sexuality,” Smith said. “I hope this opens the door for others after seeing the unbelievable support that he has received since his announcement.

The fans of the Carolina RailHawks, one of the Silverbacks’ fellow North American Soccer League teams, gave Rogers a big ovation when he recently came on as a substitute for the Galaxy during a U.S. Open Cup match at WakeMed Soccer Park. It was just one of the many examples of how supportive the soccer community has been of Rogers and the entire movement to promote equality within the sport.

“I’m honored as a coach of a professional soccer team to promote and support equality in sports,” Haynes said. “Soccer has been a sport for both males and females, regardless of their sexual preference. It’s an equal rights sport, and with the Atlanta Silverbacks having both a men’s and women’s team, we support this equality wholeheartedly.”

Hudson Taylor, Founder and Executive Director of Athlete Ally, commented on the team’s support saying, “The Silverbacks’ pledge to LGBT inclusion and respect in sports is a testament to their values and leadership, and sends powerful message to LGBT athletes and fans that soccer respects and welcomes them. I commend the team’s leadership in taking the Athlete Ally pledge, and I look forward to the positive impact of this important moment.”

The Silverbacks have already begun reaching out to local LGBT groups to investigate the possibilities of working together to promote the cause. For fans who want to learn more about Athlete Ally, they can visit the organization’s website at athleteally.org.

The team, which currently sits in second place in the NASL standings, will go on the road this Saturday to play the Fort Lauderdale Strikers before returning home on June 22 to host the Tampa Bay Rowdies, the league’s defending champions. To purchase tickets, call 404-969-4900 or visit atlantasilverbacksfc.com.