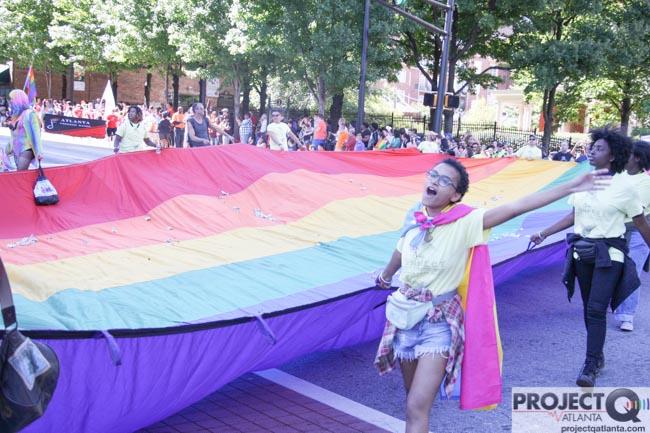 A diverse group of eight LGBT activists, advocates, allies and organizations will have the honor of leading the Atlanta Pride parade in October.

Atlanta Pride officials unveiled their picks for parade grand marshals on Friday, a not so subtle reminder that once you’re done celebrating pride everywhere else in June there’s still plenty more partying, politicking and rallying to do in early October right here in Atlanta.

“Our expanded selection process that we have followed for almost a decade now, allows us to recognize the people and organizations who have made and are making extraordinary contributions to the Atlanta LGBTQ community, said Jamie Fergerson, Pride’s executive director.

“The Atlanta Pride Committee has a mandate to capture and compliment the wide range of diverse activists among us. We strongly believe that we have done that again this year,” Fergerson added.

The Atlanta Pride parade is set for Oct. 15.

More about each grand marshal, via Atlanta Pride: 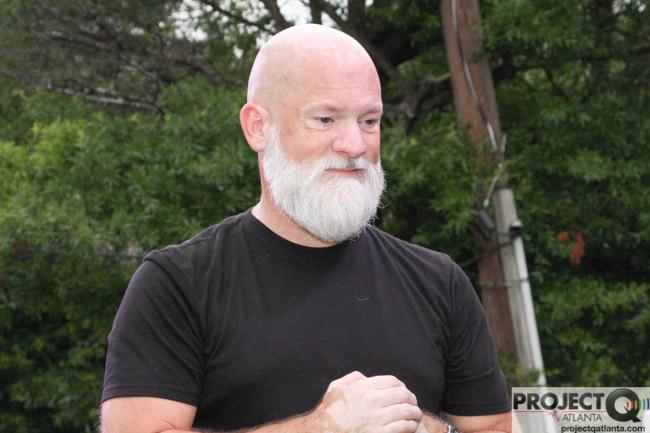 David Cowan, Freelance Deaf Interpreter, resident of Atlanta, Georgia since 1998. Been interpreting at Atlanta Pride, Black Lives Matter protest, Anti-Trump protest, Orlando Pulse Vigil at Center for Civil & Human Rights, and the Women's March. Graduated from Gallaudet University, the only liberal arts college for the deaf in the world, located in Washington, D.C. Worked for Gallaudet Interpreting Services for 8 years. I'm also an actor for ASL Films Company, the name of the movie is called “Beyond the Embers”. When I am not working or volunteering, I enjoy spending time at my lakehouse at Norris Lake, boating and water-skiing. Also traveling to San Francisco and Hawaii. 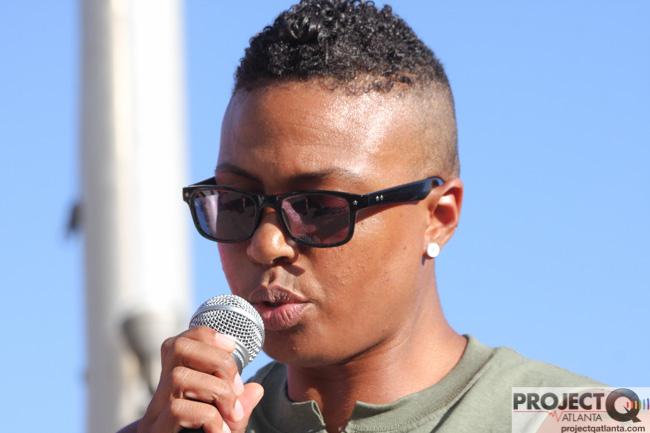 Holiday Simmons, MSW is a Black Cherokee transmasculine two-spirit activist, athlete, and lover of babies, soccer, and the ocean. He has a background in Social Work, Education, and Performing Arts & Activism. Holiday is currently the Director of Community Education and Advocacy at Lambda Legal where he focuses on transgender rights, police violence, Black resiliency, and LGBT Native Americans and two-spirit magic. He is a proud Southerner based out of Atlanta, GA. 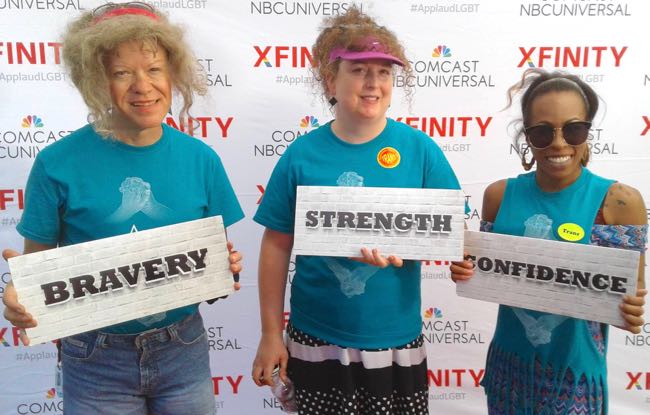 Jamie Roberts (photo center) is a native of Griffin, Georgia. Her father was thirty-year employee of Delta Airlines and her mother was a homemaker and bookkeeper.  Jamie graduated from Griffin-Spalding County High School in 1990 where she was captain of her Academic team among other things and found her place in the precarious social climate of secondary education as a crucial link between the nerds, the geeks, the popular kids and the athletes. She began her college career at Gordon College (known to Griffinites as 13th grade), later transferring to Georgia College and State University in Milledgeville where she majored in Psychology, binge drinking, and substance abuse while quietly struggling with her sexual orientation and gender identity. Several arrests and a marriage and divorce later she got her law degree at the University of Georgia where she began a 17-year career as a public interest attorney and public defender. She lives now in East Lake in Dekalb County with her beloved partner Becky Rafter and their three cats in a Co-Housing Community. 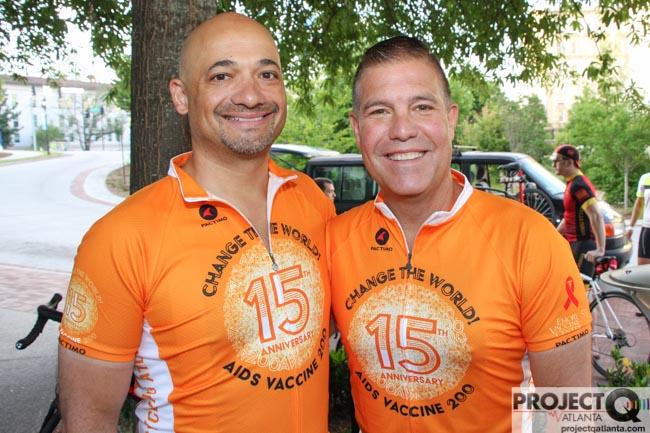 Jerry Gonzalez (photo left) is the founding and current Executive Director of Georgia Association of Latino Elected Officials (GALEO) and the GALEO Latino Community Development Fund. GALEO was founded in 2003 and is a 501 (c) (6) statewide nonprofit and non-partisan organization; its mission is to increase civic engagement and leadership development of the Latino/Hispanic community across Georgia. The GALEO Latino Community Development Fund is a 501(c) (3) nonprofit organization affiliated with GALEO.

Gonzalez is a native of Laredo, TX and received his B.S. in Mechanical Engineering from Texas A&M University in 1995. He completed his Master of Public Administration with a Nonprofit Administration emphasis at the Andrew Young School of Public Policy at Georgia State University in 2005. Gonzalez was an active student at Texas A&M with diverse interests including the Society of Mexican American Engineers and Scientists (MAES), the Fightin’ Texas Aggie Band (clarinet), and the Corps of Cadets. After graduation, Gonzalez served on the MAES National Board of Directors as a Regional Vice President.

In 1996, Gonzalez moved to Atlanta for a job as Field Support Engineer for Rockwell Automation, which was based in Milwaukee, WI. After transitioning into the nonprofit arena in 2002, Gonzalez worked with the Mexican American Legal Defense and Educational Fund (MALDEF) as a Legislative Policy Analyst, focusing upon immigrants’ rights issues at the Georgia General Assembly and in several local jurisdictions across the Southeast. Through his efforts, DeKalb County became the largest municipality to accept the Mexican Matricula Consular ID card as a form of identification for Mexican nationals in DeKalb County and he worked towards the passage of a new Georgia flag without the confederate battle emblem.

At GALEO, Gonzalez has utilized not only his extensive political experience but also his deep understanding of the struggles of the Latino community in Georgia. During the 2010 Census, Gonzalez strongly advocated for strong participation of the Latino community, which ended up having a 96% increase, representing 28% of the state’s overall growth. In voter engagement efforts, the Latino electorate has grown to well over 150,000 from a mere 10,000 in 2003. In addition, the Latino voter participation rates in most jurisdictions in Georgia during the 2008 election out-performed the national Latino voter participation rates. In 2011, Gonzalez and GALEO actively opposed passage of Georgia’s HB 87, an Arizona-style anti-immigration legislation. After the passage of HB 87, Gonzalez worked with community leaders and lawyers on a lawsuit that sought to halt its implementation and filed an Amicus Brief in support of the litigation to stop HB87. Fortunately, a federal judge did halt the major “show me your papers” provisions of the law.

Due to his efforts at GALEO, Mr. Gonzalez has been recognized by Georgia Trend Magazine as one of Georgia’s 100 Most Influential Georgians for several of years, along with many other honors and awards.

When not traveling throughout Georgia speaking at town hall meetings and advocating for education, civic engagement and fair immigration policies, Gonzalez lives in Atlanta with his life partner and husband of over 20 years, Ray, an established and practicing pediatrician, and their dog, Jenny.  Jerry’s hobbies include photography, travel, hiking and considers himself an avid bicyclist. 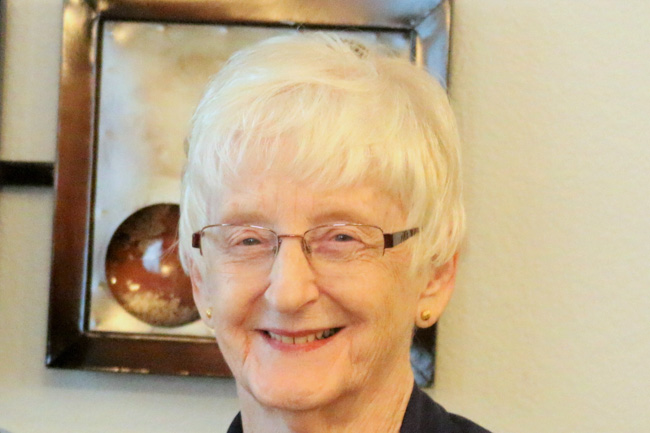 Sandy Lane was born in Stillwater, Oklahoma, but grew up a citizen of the world, living in a dozen US states and half a dozen countries.  She studied at the University of Hawaii and graduated from the University of Arizona “With High Distinction.”  Sandy married Tom Lane in 1958 and during the 60’s their family grew to include children, Sherri and Mark.  Later they embraced daughters-in-law, Carolyn and Christine, and granddaughters, Allison and Ana, and numerous rescued dogs, cats, birds and various rodents.

Sandy has a strong sense of justice and fights passionately for causes she believes in – mostly in the civil rights arena.  She taught about math and life to teenagers in Arizona, Texas, Georgia and Saudi Arabia.  For the past 24 years she has advocated for LGBTQ rights as President of PFLAG Albuquerque, State Chair for PFLAG New Mexico, Charter President of PFLAG Blairsville, and surrogate mom for anyone needing a mom’s love.  She is all about creating unconditionally loving environments in homes, schools, churches, businesses and communities.

Sandy has been awarded the Courageous Love Award by the Georgia Mountains Unitarian Church and recently, PFLAG Blairsville established a scholarship in her name to carry on her vision of safe places for LGBTQ youth to learn and thrive.

AHRC is a community-based wellness organization committed to promoting health and dignity by reducing the impact of HIV/AIDS, Hepatitis C, STI, and Substance Use within vulnerable communities. In 1994, AHRC grew out of concern about the high rate of HIV transmission among Atlanta’s injection drug users (IDUs). AHRC was formally incorporated in 1995 with the goal of educating IDUs and non-users, community leaders, public health, safety, and elected officials, and other organizations about the effectiveness of harm reduction strategies to reduce the transmission of HIV/AIDS. AHRC is the only organization in Atlanta that focuses specifically on promoting harm reduction strategies not only to affected populations, but also to the broader community. Building trusting relationships between AHRC outreach workers and active drug users is the foundation upon which behavioral changes are built.  AHRC is a prevention and wellness agency that is dedicated in serving IDU, multi-substance users, sex workers, and other marginalized population throughout counties of DeKalb and Fulton. Currently AHRC has several comprehensive programs, which include Syringe Exchange, HIV Prevention, Hepatitis C Prevention, Overdose Prevention, and Linkage to care. 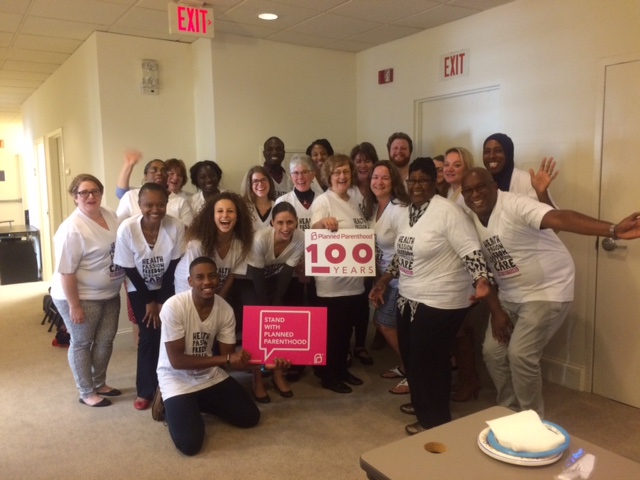 Planned Parenthood Southeast (PPSE) is a trusted healthcare provider, skilled prevention educator, and passionate advocate, delivering vital reproductive health care and sex education to thousands in Georgia, Alabama, and Mississippi. Our mission is to provide voluntary family planning services and education that enhance personal and social understanding of human sexuality. We advocate for public policies that guarantee reproductive rights and access to health care. And, we support and encourage advances in reproductive technology. We believe in the fundamental right of each individual to manage his or her fertility, regardless of the individual's income, marital status, race, ethnicity, gender identity or expression, sexual orientation, age, religion, disability, or residence. 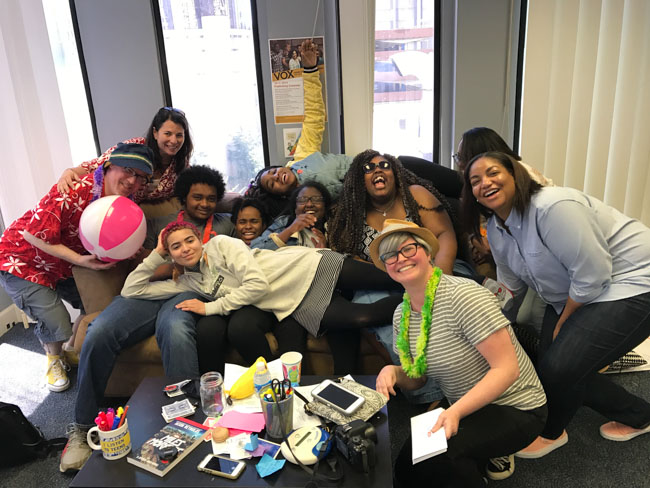 VOX Teen Communications is Atlanta’s home for uncensored teen publishing and self-expression. This 24-year-old youth-development organization is committed to providing teens a safe space to connect with their peers from all over Atlanta, publish content and resources and develop as community leaders.