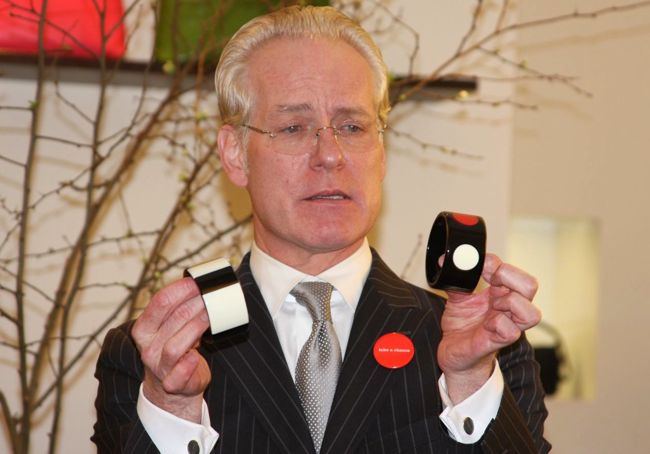 Atlanta Pride fired back at fashion therapist Tim Gunn over his demand that it move a popular party from the Georgia Aquarium, even cribbing a line made popular last fall by GOP presidential candidate Mitt Romney to make its case. It's a kerfuffle worthy of a "Project Runway" segment. On April 17, the gay style guru sent a letter on behalf of PETA demanding that Pride move its kickoff party from the venue over concerns that it "disturbs and unnerves" the aquarium's beluga whales. Lesbian actress Jane Lynch offered the same complaints and request last year. Pride resisted and the aquarium spoke out that the sold-out event, which attracts a crowd of 4,000 people, doesn't harm the whales. On Wednesday, Pride fired back as Gunn's letter gained national media attention. "Your letter is unfortunately the latest one produced as part of an orchestrated and highly misleading media campaign conducted against Georgia Aquarium by PETA as part of its stated anti-zoo-and-aquarium agenda," Pride Executive Director Buck Cooke wrote. "It is very discouraging to see that [PETA is] continuing to misinform their longtime celebrity supporters, in what is seems to be an opportunistic publicity stunt." Translation: Smooches, girl. Love your "Project Runway" work, but stick to fashion. We're not moving the party, bless your heart, but thanks for asking. Please do come and get drunk with us and 4,000 other gays at the Oct. 11 event. Just don't bring that Kors fella. Or Lynch. Not to stop there, Pride also invoked the words of Romney in its letter to Gunn.

While we respect the right of all individuals, including PETA, to voice their opinions, they are not entitled to manufacture their own facts.

April 24, 2013 Dear Tim, I must first start by saying that we have nothing but respect for you. You have been a longtime supporter of Pride events and are clearly a respected and well-known member of the LGBTQ community. We also deeply respect credible animal rights groups, local humane shelters and other important organizations, such as Georgia Aquarium, which truly do great work on behalf of animals. At the core, your letter is unfortunately the latest one produced as part of an orchestrated and highly misleading media campaign conducted against Georgia Aquarium by PETA as part of its stated anti-zoo-and-aquarium agenda. Sadly, they have targeted Atlanta Pride and our annual event out of the hundreds of events held at Georgia Aquarium each year. While we respect the right of all individuals, including PETA, to voice their opinions, they are not entitled to manufacture their own facts. It remains astonishing as to why an organization proclaiming itself as one of the nation’s largest animal rights groups would continually dilute its platform by propagating misinformation. At the receipt of your letter, it is very discouraging to see that they are continuing to misinform their longtime celebrity supporters, in what is seems to be an opportunistic publicity stunt. Over the last two years, individuals associated with PETA have given a distorted and inaccurate portrayal of the Atlanta Pride event at Georgia Aquarium and made inappropriate accusations based more on their own anti-aquarium agenda than on fact. They have accused Georgia Aquarium of subjecting the animals in its care to harmful music at the kickoff event for the Atlanta Pride Festival. They have also mischaracterized the event itself, describing it as more of an all-night rave than the friendly evening cocktail mixer that it is in reality. Unfortunately, they have recruited a few high-profile, well-intentioned but misinformed supporters from the LGBTQ community – none of whom have ever attended this event - to add much-needed credibility to their campaign. The underlying accusation is that Georgia Aquarium – one of the world’s leading aquariums, boasting a staff of dedicated and accomplished marine biologists, scientists and experts in the care of animals – regularly subjects its animals to intolerable noise levels in the name of profit. In the opinion of Atlanta Pride, nothing could be further from the truth. Georgia Aquarium has been a great partner for both our community and for the Atlanta Pride Committee. They have embraced our kick-off event, now in its fifth year. As you can imagine, we at Atlanta Pride have worked closely with Aquarium officials over the years, and have met and interacted with their leadership and their animal care team. They been more than forthright about any and all concerns voiced by the general public, as well as animal rights extremist groups. As we at Atlanta Pride have come to know, Georgia Aquarium is a non-profit, technologically advanced facility, having just opened in 2005. Among many other goals, part of the Aquarium’s mission is to educate its millions of general admission and special event guests each year on the aquatic world, and revenues generated by ticket sales and events help them do that. These proceeds also help them provide exceptional care for their animals, maintain their facility as a center for learning, and contribute millions to support conservation efforts and research projects around the world. The Aquarium building was designed and built with special events in mind and hosts hundreds each year. Because of this, as Aquarium officials have shared with us and the public, they have a set limit on sound levels based on the most current research available regarding hearing thresholds in certain animals, and constantly monitor ambient sound levels near and around animal exhibits using sophisticated electronic devices. The Aquarium aggressively protects animals from any sound that exceeds these limits. Volume is also monitored by professional sound engineers throughout every large event, as was done for Pride events in the past and will be done for this year’s Pride event. This same information has been shared with both PETA, and will be shared with you by Aquarium staff; unfortunately PETA’s campaign of misinformation continues. They refuse to acknowledge that this manufactured, non-issue has already been addressed in both popular media and private communication. The Aquarium team also educated us on the fact that American zoos and aquariums are subject to strict regulations by the USDA and other federal regulatory agencies, and that Georgia Aquarium is no exception. Georgia Aquarium is accredited by the Association of Zoos and Aquariums (AZA) and the Alliance of Marine Mammal Parks and Aquariums (AMMPA) and proudly adheres to all regulations and guidelines set by all of these entities. You have an open invitation to attend our Official Kick-off Party this year or to visit the Aquarium, so that you can witness firsthand our wonderful event and this world-class attraction. Also, the Aquarium team has offered to talk with you personally on this issue, as they have so frequently with our own team. I do hope that this clarifies both the facts and our position on this issue. We at Atlanta Pride and/or a representative of Georgia Aquarium are happy to answer any questions you may have. Sincerely, Buck Cooke Executive Director Atlanta Pride Committee, Inc.