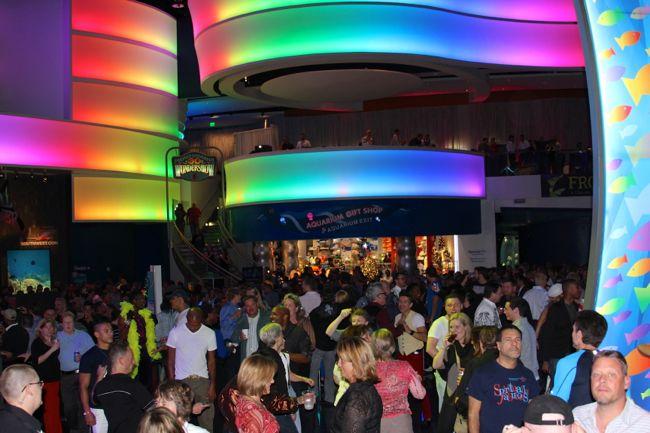 Despite Tim Gunn’s request for the Georgia Aquarium to avert their gays, the party will go on as scheduled as Atlanta Pride announced on Tuesday the return of the 2013 Official Pride Kickoff Party on Oct. 11.

This year’s party features versatile DJ Chris Griswold in the Oceans Ballroom, venerable DJ Vicki Powell in the Atrium and of course the thousands of dapper gay boys and girls from in and out of town looking to start off Pride in style.

The party has dealt with its fair share of controversy from PETA-backed celebrities the last couple of years over the question of whether that gay thumpa-thumpa is harmful to the beluga whales. Last year it was Jane Lynch who came out megaphone blazing, and this year it was gay fashion guru Tim Gunn. Both times, APC politely told the celebs to piss off, saying that the Georgia Aquarium was designed for events just like this, and that Aquarium officials know at what point the whales would be all like “Turn it down, girl!”

So put the party on the calendar, but just remember to get your tickets now. The shindig always sells out fast so don’t be left out in the cold trying to make it work come October.

The Atlanta Pride Committee (APC) is pleased to announce that the Official Kickoff Party will be returning to the Georgia Aquarium in 2013.  This perennial favorite is scheduled for Friday, October 11th and launches the Southeast’s largest Pride Festival, hosted October 12-13, which coincides with National Coming Out Day.

Scott Higley, Vice President, Marketing & Communications for the Georgia Aquarium said of the event, “Georgia Aquarium is once again thrilled to host the Kick Off Party for Atlanta Pride.  The Aquarium has always promoted inclusiveness and embraced diversity in all its forms, and we are glad to continue our excellent relationship with Atlanta Pride.  With the party now in its fifth year, it is a proven hit with Pride attendees,”

Atlanta Pride Executive Director, Buck Cooke, stated, “Atlanta Pride is delighted to return to Georgia Aquarium for our fifth annual Official Kick-off Party! As always, we are excited to see what our partners at Georgia Aquarium come up with in terms of ambiance and decoration for one of the most marvelous cocktail parties in Atlanta!”

Cooke continued, “This event is a perfect kick-off to the weekend because it gives our entire LGBTQ and ally community an opportunity to come together and enjoy a beautiful venue, magnificent animals, festive music, and a joyful (prideful, even!) atmosphere.”

An impressive offering of entertainment will be featured, including DJ Chris Griswold who will take to the tables in the Oceans Ballroom offering up his signature sound for the night.  Local celebrity DJ, Vicki Powell, adds her enthusiastic beat to the mix and will be spinning in the Atrium during what is sure to be a memorable evening!

Cooke offered this piece of advice to attendees, “I want to encourage folks to get their tickets earlier rather than later. Every year we are inundated with requests for tickets once the party sells out. This event sells out every year, so why wait? Purchase your tickets today!”

Tickets to the Official Kickoff Party are available now at: https://www.georgiaaquarium.org/atlantapride

Photo by Sher Pruitt from Pride Kickoff Party in 2012