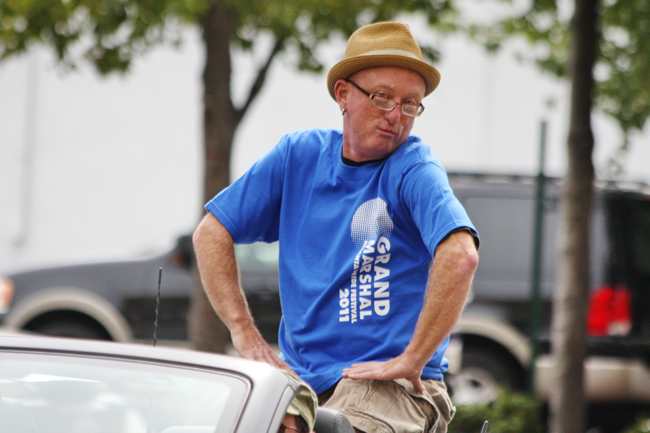 The help wanted period over, Atlanta Pride on Thursday announced a slate of grand marshals for its big gay parade through Midtown in October. Call them unsung heroes of LGBT equality.

Or you can call at least one of them, HIV activist and blogger Mark King, a little grumpy. He's not a fan of sexy gay abs that can sing or Uncle Poodle's claims about how he became HIV-positive. But he provides a candid look into living as an HIV-positive gay man with My Fabulous Disease.

And King is one of seven grand marshals that Atlanta Pride announced. The others include Christina Bucher, Lorraine Fontana, Evelyn Mims, Charles Stephens, Atlanta Sisters of Perpetual Indulgence and Charis Circle.

"We are thrilled to recognize these outstanding individuals and organizations," Atlanta Pride Executive Director Buck Cooke says in a press release. "Each of these honorees works diligently to make Atlanta and Georgia more welcoming and affirming for LGBTQ citizens. They come from different walks of life and have left their fingerprints on our community."

In 2012, Pride selected six people and two organizations to lead the parade.

Atlanta, Georgia. – The Atlanta Pride Committee (APC) is pleased to announce that the 2013 Parade Grand Marshals have been selected!

The Grand Marshals are comprised of individuals and organizations in Georgia who have contributed significantly to the LGBT community in Atlanta and the state of Georgia.

Atlanta Pride Committee Executive Director, Buck Cooke, said, “We are thrilled to recognize these outstanding individuals and organizations. Each of these honorees works diligently to make Atlanta and Georgia more welcoming and affirming for LGBTQ citizens.”  Cooke continued, “They come from different walks of life and have left their fingerprints on our community. Please join APC in congratulating our honorees!”

The APC noted that nominations were solicited earlier in the year and from that, APC received over 50 nominations, making it another robust year for input from Atlanta’s LGBT community.  Cooke stated, “We would like to thank the community for giving us such an outstanding and extensive collection of individuals and organizations to review as nominees.”  He acknowledged,  “It certainly makes our selection process more difficult, but that is an excellent problem to have!”

These community leaders will be featured in the annual Parade that takes place at 1:00 p.m. on Sunday, October 13.

Dr. Christina (Tina) Bucher lives in Rome, GA, where she is an Associate Professor of English, Rhetoric, and Writing at Berry College.  For most of her 18 years at Berry, she has been one of many people who have worked persistently to gain official status for Listen, an LGBT student organization.  This goal was finally achieved in September 2012.  She functioned as an advisor to LGBT students and allies for the years when a group was still unofficial, wrote for campus publications and spoke on panels raising awareness on LGBT issues, collaborated with the Dean of Students to bring Safe Space training to the campus in 2008, and served with other dedicated colleagues and students on the committee whose work led to approval of Listen last fall.  The group made its inaugural march in the Atlanta Pride Parade in October 2012.

In addition, Dr. Bucher created Berry’s first course in gay and lesbian literature, now listed in the college catalog. She served as a PFLAG representative in Rome from 2007-2012 and is an active member of the board for the AIDS Resource Council of Rome. She shares life and adventures with her partner, Sherre Harrington.

Lorraine Fontana was born in 1947 and raised in a working class Italian family in Queens, NYC.  She became a supporter of the Civil Rights and Black Empowerment Movements and an anti-war activist early in life.  Joining VISTA in 1968 is what brought her to Atlanta and she came out there among other leftist and feminist women who together founded the Atlanta Lesbian Feminist Alliance (ALFA - 1972 to 1994), and later DARII (Dykes for the Second American Revolution).  Her legal training (1976-79) at the People’s College of Law in L.A. led to work as a staffperson with the National Jury Project, a brief period doing poverty law with Georgia Legal Services, and later using her legal skills as a paralegal back in NYC for the EEOC (Oct 1999 to Jan, 2004), and in Georgia as a Legal Assistant for Lambda Legal Education & Defense Fund (2006-2012).  In the mid-70’s and 80’s she often served as an ALFA rep to coalition/partnership projects with both others in the growing “out”-LGBTQ community as well as the larger progressive community. More recently she became a member of the short-lived Queer Progressive Agenda (QPA), and has endeavored to be an ally to queers of color-led organizations in the ATL.  She’s also member/supporter of First Existentialist Congregation of Atlanta’s Social Justice Guild, the Georgia Peace & Justice Coalition, Charis Books, the Atlanta Grandmothers for Peace, SAGE Atlanta, and Southerners on New Ground.

Mark S. King has been advocating for those with HIV since he tested positive in 1985, the year the HIV test became available.  His award-winning blog, My Fabulous Disease (MyFabulousDisease.com), chronicles his challenges as an HIV+ gay man, often with a disarming sense of humor.  “We all have the same condition,” says Mark, “it’s called life.”

In Los Angeles in 1988, Mark began working for LA Shanti and found a “beautiful grace” in providing emotional support for clients dying from AIDS. In 1993, he moved to Atlanta for leadership positions with AIDS Survival Project and AID Atlanta.  He created HIV programs that have been duplicated around the world and even raised funds as an Armorette for several years.

Mark’s candid (and sometimes controversial) writings have addressed the tensions between positive and negative gay men, barebacking, HIV criminalization, and the crippling stigma directed at those with HIV. He has written for Newsweek, The Advocate, POZ, and GA Voice, shared the anchor desk with Don Lemon on CNN, and appeared in the documentary about gay men and addiction, Meth.

A long-time ally to the LGBTQ community, Evelyn Mims has volunteered for numerous charities related to HIV and AIDS, including AID Atlanta. She was standing up for LGBTQ rights and issues at a time when many would have remained silent because of the stigma attached to the issues. She also co-hosted the Mouth of the South drag show with Atlanta drag legend Peg, which was filmed live at the Metro and broadcast on public access television.

In recent years, Evelyn has been the driving force behind the coverage of the Atlanta Pride Parade on WXIA 11Alive’s website, which streams the parade live. Her television career spans more than 30 years. She is a member of the National Academy of Television Arts and Sciences (NATAS) and served as past president of the Southeast Chapter, where she was the first African-American leader of any chapter.

A graduate of Jackson State University in Mississippi, her first job was at NBC affiliate WLBT, later she rose to Program Coordinator of 11Alive. Evelyn works in front of the camera as well behind the scenes, receiving three EMMY nominations for her role as the “Soap Sultress” on 11Alive’s top-rated “Noonday” show, which lead to guest appearances on “Days of Our Lives.”

Charles Stephens is a writer and activist. He is the Program Coordinator for the 2014 “Whose Beloved Community?: Black Civil and LGBT Rights Movements” conference being hosted by Emory University next Spring. He is also a member of the Atlanta Black LGBT Coalition. While a student at Georgia State University, he co-founded Black Out, a Black LGBT student organization and was awarded the ZAMI scholarship Tony Daniels Community Award. Currently, he is co-editing an anthology called Black Gay Genius: Answering Joseph Beam’s Call and has blogs on Huffington Post and dot429.com.

They are an Order of 21st century nuns dedicated to the manifestation of cosmic joy through freedom of expression, charitable acts, community outreach, and social activism.  They are devoted to supporting our community through education on health and safety issues; promotion of awareness and spiritual enlightenment, and the abolishment of bigotry and hatred.

Since their Immaculate Conception, the Atlanta Sisters have grown from a group of four Sisters to a family of more than 25 Sisters and Guards.  To learn more about the Sisters, please visit them at www.atlsisters.org.

Charis Circle is the non-profit programming center located at Charis Books and More, the nation's oldest independent feminist bookstore. Charis Circle seeks to foster sustainable feminist and queer communities, to work for social justice, and to encourage the expression of diverse and marginalized voices. On a day-to-day level that means they connect people with the books, resources, and ideas that help them grow as whole, healthy, and empowered individuals. Join the party at: www.charisbooksandmore.com or find them on Facebook, Twitter, and Yelp.