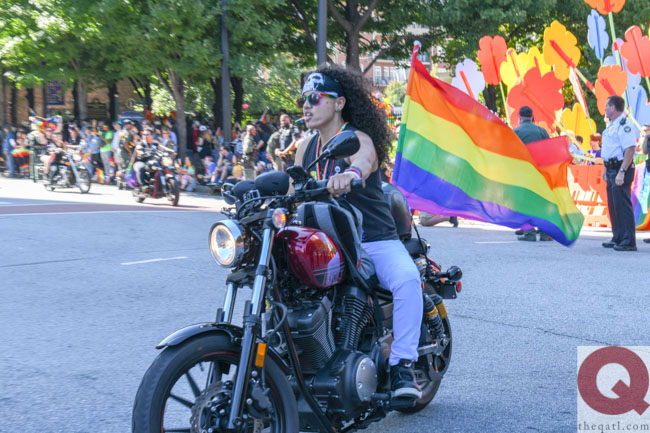 Thousands of people and hundreds of floats and participants made for a festive afternoon on Oct. 14 as the Atlanta Pride parade meandered its way through Midtown.

The capstone event of a weekend of rainbow revelry opened with Dykes on Bikes and included bunches of political candidates and elected officials, LGBT first responders, non-profits, religious organizations and churches, big brands and small businesses, and eight grand marshals.

The parade also featured Mayor Keisha Lance Bottoms in her first Pride parade as Atlanta's new chief executive and Stacey Abrams, who became the first major party candidate for governor to take part in the hours-long event. She was driven in a Jeep by a gay former cop featured in a campaign ad.

Pride weekend opened with a blowout party at Georgia Aquarium and as the parade marched past Ten's hunk-filled block party, it emptied into Piedmont Park. Perfectly sunny weather made for smiles – and shirtless Pride-goers – all weekend long.

And when the sun went down, the party didn't stop.