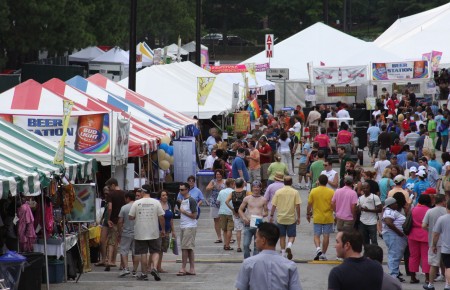 As if the Atlanta Pride Festival needed any more bad news.

Why does it matter? If the Piedmont Park Conservancy, the park’s non-profit caretake, can’t find a private source of water to feed its trees and expansive lawns, it’s unlikely the festival — or any of the city’s large-sclae events — will be allowed to return in 2009. City officials and the conservancy booted the festivals and sports organizations from the park in January, though they have recently begun allowing sports groups to return to the athletic fields.

The two drilling attempts cost the Piedmont Park Conservancy $50,000 apiece. The first attempt in June led to a well that generates 50 gallons of water per minute, enough for a residence, said Monica Thornton, the conservancy’s vice president and chief marketing development officer. That will help to water the trees, but the conservancy also needs water to maintain the athletic fields that underwent a $2.1 million renovation, not to mention the rest of the park.

As the Conservancy pursues a 53-acre expansion north of the park, it could attempt to drill more wells, Thornton said. The park has identified seven potential drilling sites.

The move from Piedmont severely impacted the three-day Pride festival, costing it more in rental fees and forcing it to also shift dates away from its traditional late June staging. Organizers were left with a $160,000 deficit from the event and its two top officials later resigned.

After an Aug. 23 meeting, the Atlanta Pride Committee’s board of directors and festival committee are working on ways to rebound from a 2008 event that saw a $164,736 deficit after the festival was forced to change both venue and date just six months out.

While Atlanta Pride had a nest egg stashed away from profits made from the 2007, 2005, and 2004 festivals among others, the Pride Committee currently has a six to eight month supply of operating funds.

“If we look at our current financial standing right now, for what we have in the bank, if we look at the exact expenses, rent, one salary, storage unit, the nitty-gritty stuff, if we didn’t do anything we would be around for about six months. But obviously we are going to do things,” said Pride board chairperson Deirdre Heffernan. “That actually is a better picture than we first thought, so that gives us breathing room to move forward and make our plans.”

Pride organizers are working on two fundraisers — asking 5,000 supporters to donate $25 and a bicycle ride in early October. The festival is also hosting an online poll to gauge support for a 2009 event in the summer or fall.