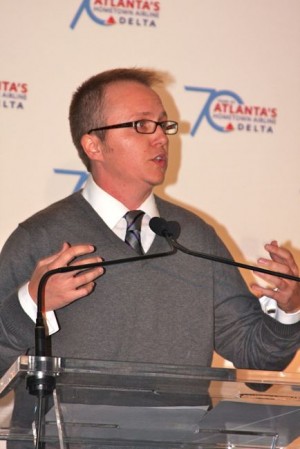 The executive director of the Atlanta Pride Committee is quitting after more than two years leading the agency that organizes and hosts the popular annual festival each October to take a new post at another non-profit. James Parker Sheffield (photo), a Pride employee for nearly 12 years and its executive director since 2009, is leaving the post to fill a newly-created position of organizational development director at the Health Initiative. The two organizations share office space in the Rush Center. Pride officials announced the resignation in a press release issued Wednesday. “It was not an easy decision, as I am emotionally invested in APC (the Atlanta Pride Committee),” Sheffield said. “I believe that my skill set is ideal for the Health Initiative’s expansion work. My interest in LGBT health has grown with my involvement in the Pride Community Health Expo, partnerships with Grady and Kaiser, and my own personal experiences related to healthcare as a trans man. The Health Initiative’s movement toward reaching a more broad community excites me and I want to play a role in this new level of outreach.” The organization says it will appoint an interim manager and launch a search for a new executive director. Pride officials did not say when the search will take place. “James has served this organization well in his decade-plus tenure with Pride,” says Glen Paul Freedman, board chair of Atlanta Pride. “While we are saddened that he will be leaving us, we are excited for him in his new endeavor and wish him well!.” Atlanta Pride enjoyed one of its most successful events yet during the festival last October. Sheffield has worked to smooth relations with LGBT-businesses and bars and overcome financial troubles since the event was forced to move from Piedmont Park in 2008. The event returned to the park for the 2009 festival. Sheffield also worked to expand Pride's offerings by creating a slate of events called Stonewall Week in June. He was one of at least six LGBT Atlantans to attend President Obama's annual Pride reception last June in Washington. Photo by Sher Pruitt