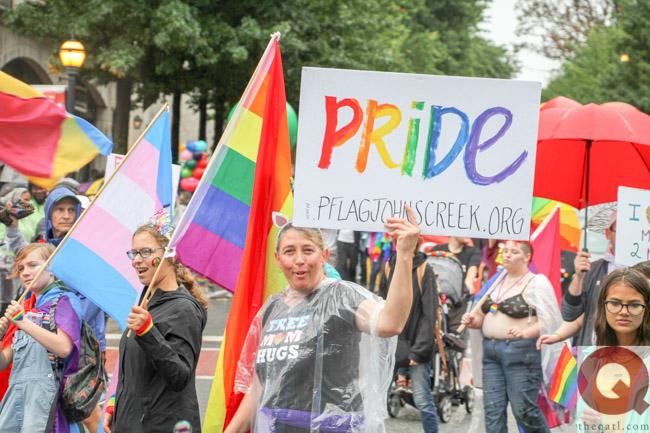 LGBTQ Atlanta’s biggest event of the year – the Atlanta Pride festival in Piedmont Park and parade through Midtown in early October – has been canceled. The coronavirus pandemic forced organizers to take the celebration online.

The festival is the latest victim of the pandemic, which has forced events to be called off, closed businesses and stunted LGBTQ nightlife venues. This year marks the 50th anniversary of Atlanta Pride.

The Atlanta Pride Committee announced the shift to a virtual event on Wednesday.

“We regret to announce that we will not be able to hold the 2020 Pride Festival in person, due to the ongoing pandemic,” Jamie Fergerson, executive director of the Atlanta Pride Committee, said in a press release.

“The health and wellbeing of our community is always our top priority, especially for the most marginalized in our community including queer and transgender folks who we know are less likely to have access to safe and competent primary care, LGBT elders, those living with HIV, cancer or immunodeficiencies who are at increased risk. This was the main factor in our decision,” Fergerson said.

In March, Mayor Keisha Lance Bottoms put in place a moratorium on the city accepting permit applications for outdoor events, which Pride needs to host the annual event each October in Piedmont Park. The moratorium can be lifted at any time, but Gov. Brian Kemp this week extended a ban on public gatherings of more than 50 people if social distancing guidelines can’t be met.

The permit process, as well as the pandemic’s expected impact on sponsorships and fundraising, were concerns Fergerson cited as early as May. Even then, she said the decision to host the outdoor event would be based on “health interests.”

Last week, Fergerson told Project Q Atlanta that Pride organizers were still tentatively planning for the 50th anniversary to be held Oct. 10-11. Organizers of other LGBTQ events in the fall – including Black Gay Pride, Out on Film and the 30th Annual AIDS Walk Atlanta – said last week they are in a holding pattern.

Besides the festival and parade, Pride weekend also offers a vibrant nightlife scene that includes packed bars and large dance parties. It’s unclear whether party promoters will still host a version of their events and how LGBTQ bars – facing their own problems with coronavirus – will react with the outdoor festival and parade being called off.

Atlanta Pride said Wednesday they are planning for the organization’s first-ever virtual Pride celebration but did not release details of the online event.

“By moving the Atlanta Pride Festival online, we will ensure that LGBTQ+ people can still experience the joy and togetherness of our 50th Annual Pride Festival, and we hope to welcome new people to take part wherever they are,” Fergerson said.

The cancellation of the outdoor festival and parade is the largest change to Atlanta Pride since 2008. That’s when the City of Atlanta, facing a drought, closed Piedmont Park to large-scale events.

That forced Atlanta Pride to move from the park to Central Park and the Atlanta Civic Center. The event also moved from its traditional date of late June to early July. The changes to the festival resulted in smaller crowds and financial losses of more than $160,000 for Atlanta Pride.

In 2009, the event returned to the park but shifted to October.