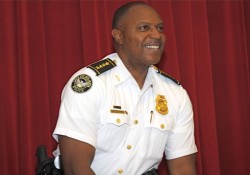 Allegations of misconduct have led to the ouster of the commander of the Atlanta Police Department’s internal affairs unit and cast doubt over the fate of two investigations into gay cases.

Chief George Turner (photo) on Thursday demoted Moses Perdue, who led the department’s Office of Professional Standards (OPS), to lieutenant and stripped him of his badge and gun until an investigation is complete. Turner appointed Perdue to head the internal affairs unit during a massive reorganization of the agency in January.

“Our officers are sworn to enforce and uphold the law,” Turner says in a statement. “Those who are appointed to ‘police the police’ must be held to a much greater standard. This is an unfortunate incident, but just like all city employees, Lieutenant Perdue is entitled to due process prior to any final decisions [being] made. I will reserve further judgment and comment on the situation until the investigation is complete.”

Turner and the police department didn’t specify what prompted Perdue’s demotion. But the Sunday Paper, which broke the story, reported that Perdue crashed his department-issued vehicle in June. Fox 5 reported that Perdue allegedly leaked sensitive information about a federal investigation into a Clayton County police officer.

The shakeup in the police department leaves uncertain the fate of two internal investigations with gay ties.

An OPS probe into complaints of police misconduct during the Eagle raid last September has lagged for nearly a year. Turner said last month that the probe into the Eagle complaints has completed its investigative phase, but would not say when a final report on the case would be made public.

The Atlanta Citizen Review Board has already recommended sanctions against two officers involved in the raid as it continues its look into allegations of police misconduct.

The shakeup in the internal affairs unit comes as the department and the city face a federal lawsuit over the Eagle raid. The city recently settled another lawsuit over police misconduct, but we offered five reasons why the Eagle suit won’t be settled anytime soon.