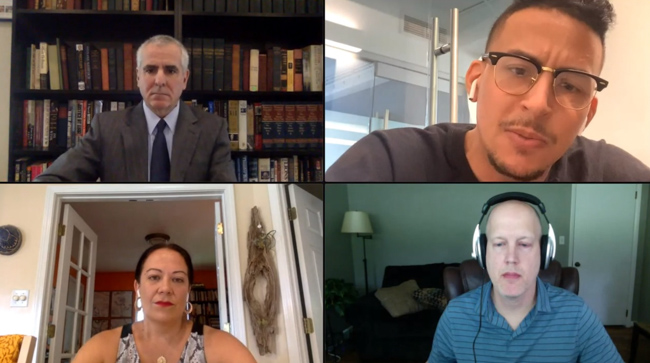 The responsibility for the shooting death of Rayshard Brooks by Atlanta police rests with Mayor Keisha Lance Bottoms and Atlanta City Council members, according to Council member Antonio Brown.

Brown, the council’s only LGBTQ member and an organizer of recent racial justice protests, said blame for the June 12 incident shouldn’t be placed solely on police Chief Erika Shields. The killing of Brooks led to the resignation of Shields, the department’s first LGBTQ leader.

“Rayshard Brooks’ death is on all of our hands, not just Chief Shields. The mayor’s responsible, councilmembers are responsible,” Brown told Project Q Atlanta. “We all have to take accountability for our lack of action that has gotten us to this place where we’ve lost a life, and continuous lives.”

“The public now sees this as a social issue and are now understanding their ability and power to hold elected officials accountable,” Brown added.

There’s been mixed messaging about defunding the police, according to Brown.

“I see it more as a reimagining of public safety,” he said. “I really think the reimagining aspect is really looking at how we can reallocate part of the police budget into restructuring how we see public safety in Atlanta.”

To that end, Brown and five other council members introduced a resolution on June 19 that would sequester $73 million of the department’s $217 million budget while a comprehensive review of the city’s approach to public safety and policing is conducted.

“That’s going to focus on reimagining public safety and doing it where we’ve set in motion action items that we can reach,” Brown said.

But the resolution failed to pass the day after being introduced, according to the AJC.

“To rethink the way that we keep communities and people well and safe from harm. Policing in Atlanta has failed us in that,” she said. “For some people, the killing of Mr. Rayshard Brooks may seem like a new problem in the department, and it is not.”

Over-policing has made some Atlanta neighborhoods look like “occupied territories,” and police are being asked to do too many things, according to Bervera.

‘This is an issue of political will’

Police reform is long overdue, according to Grossman.

“We have ducked this issue. We have abdicated our responsibility as a society, not just Atlanta,” he said. “Our public leaders have been too cowardly to recognize some truths and make some very, very hard decisions.”

It’s not the Atlanta Police Department that’s pushed back against reform over the years, according to Grossman.

“It’s the city law department and it was Kasim Reed and now Keisha Lance Bottoms,” he said.

Grossman was a key figure in suing Atlanta police on behalf of people arrested in the raid of the Atlanta Eagle in 2009.

Bottoms created a Use of Force Advisory Council in June that led her to issue orders that would improve officer compliance regarding body-worn cameras, create a way for citizens to submit video footage of use of force by officers, and to extend the powers of the Atlanta Citizen Review Board.

But these reforms address what to do after a police shooting incident, according to Bervera.

“That to me is unconscionable,” she said. “I think we should be making reforms that prevent the killing of any of our community members.”

Part of that reform should involve how police are trained, according to Grossman.

“We have trained Atlanta police officers to have an instinctive muscle memory reaction that if someone who has some kind of a weapon who is running away from them and then suddenly turns and faces them and presents a threat, they have fired their weapon hundreds of times in training,” he said. “They are doing not what they choose to do or decide to do, they are doing what we told them to do.”

Most of the incidents that led to violent outcomes began when police intervened regarding low-level offenses, according to Bervera. Brooks was asleep in his car at a Wendy’s drive-through when police were called.

“They are arresting people for jaywalking, spitting on the sidewalk and possession of marijuana, and when you have that, what you have are targeted communities — poor communities, black and brown communities, queer and trans communities,” Bervera said. “The most vulnerable in our communities become targeted by that kind of policing, and then with the kind of violence that we’ve seen happen.”

“This is an issue of political will. There is a generational split just as there is a zip code, a socioeconomic, a racial split in this city. And we need to be calling it for what it is,” she added.