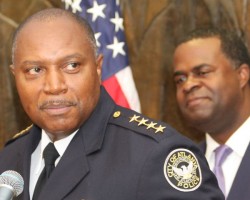 Three Atlanta Police Department officers facing allegations of groping two men during a traffic stop have been pulled from the street and placed on administrative duty, an agency spokesperson said Friday.

Two of the three officers – all of which are members of the department’s paramilitary Red Dog Unit – took part in the botched raid of the Eagle in September 2009. The allegations concerning the June traffic stop were first aired publicly Thursday by WSB. The two men, Brian Kidd and Shawn Venegas, say three officers — C. Mayes, D. Meredith and T. Britt – forced them from their car gunpoint and ordered them to pull down their pants as they were groped and forced to spread their buttocks.

Atlanta police have reacted quickly since the case became public on Thursday, issuing a statement suggesting that the actions of the officers were “inappropriate.”

The Atlanta Police Department is in the process of concluding the internal investigation into this matter. There is evidence to suggest that some of the officers’ actions during this traffic stop were inappropriate. As a result, Chief Turner (top photo) intends to move swiftly to discipline some of the officers with actions — up to, and including, dismissal. All three officers involved have been placed on administrative duty in non-enforcement capacity pending disciplinary decisions. The Atlanta Police Department expects its officers to be truthful at all times, to follow all policies and procedures and to follow all of the local, state and federal laws they are sworn to uphold. Failure to do so will not be tolerated.”

Any quick action by Turner would mark a stark departure from the way in which he, the agency and Mayor Kasim Reed have reacted to the Eagle raid. Atlanta police – nearly 17 months after the raid – have yet to complete and publicly release an internal investigation into the raid. The city’s prosecution of the eight men arrested during the raid crumbled during trial, the Atlanta Citizen Review Board has repeatedly called for sanctions against officers in the raid, and the city inked a $1.025 million settlement to a lawsuit stemming from the incident. Yet Turner has failed to take action against officers involved in the planning or execution of the raid.

Mayor Kasim Reed, who has apologized to the plaintiffs in the Eagle lawsuit, has also failed to follow through on his pledge to take “appropriate action” if allegations of wrongdoing during the raid or by the city in its aftermath were shown to be true.

After the June incident, Kidd (second photo) filed a complaint with APD’s Office of Professional Standards. It offers stark details about what allegedly took place, according to the GA Voice, which obtained a copy of the complaint.

“I saw Officer Meredith pulled Shawn’s pants forward and look into the front of his pants and underwear and then pull down his pants down from behind, but then I looked away because of what the officer was doing to Shawn,” Kidd said in the complaint.

“Later Shawn told me that Officer Meredith touched him in the genitals during the search and made him spread his butt cheeks apart. This really upset Shawn. Officer Britt made me pull my pants and my underwear out so he could look in them, and he did not find anything. They did not find anything on Shawn either,” Kidd continued.

Kidd reported that he was arrested for an outstanding bench warrant in DeKalb County, then searched again.

“Officer Britt told me that I was under arrest for the warrants and put handcuffs on me. Whilemy hands were behind my back, he opened my belt and pants and reached inside my underwear and searched and touched my testicles and found nothing illegal. I was shocked that the officer would put his hands down into my pants and touch my testicles like this. After I was searched, the officer took me to the police car.”