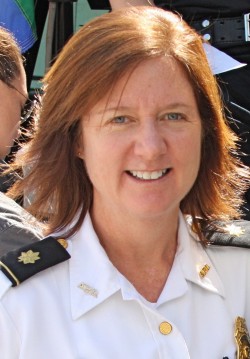 A popular veteran of the Atlanta Police Department was promoted to deputy chief this week, making her the highest-ranking publicly gay commander at a time when the agency is working to improve its relationship with the city’s LGBT residents. Major Renee Propes marked the first day in her new post on Thursday, becoming one of only four deputy chiefs at the department. The former Zone 6 commander, who served most recently as commander of the department’s precinct at Hartsfield-Jackson International Airport, is also the only woman at that rank and likely its first lesbian. Propes will now oversee the agency’s Community Services Division and its nearly 350 officers. “I hope that I can help foster really good relationships between the police department and the community, in particular the GLBT community,” Propes says. “I’ve been to forums where I’ve wanted to make sure that the community understands that the police department is a diverse police department. It is reflective of the community we serve. “We are not a bunch of homophobes in this police department. We embrace diversity. We treat each other the way we treat citizens -- in a good positive way,” she adds. 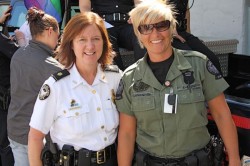 Propes oversaw the department’s Zone 6 -- which includes portions of gay-heavy Grant Park, Little Five Points, Edgewood and Kirkwood – for nearly five years before Chief George Turner assigned her to oversee police operations at the airport during a series of personnel changes in January. Propes was one of several police commanders who defended the agency during a public forum in the wake of the September 2009 raid of the Atlanta Eagle. She’s also marched with a contingent of fellow LGBT officers in the Pride parade for the last two years. Propes, who lives with her partner in Zone 6’s Kirkwood neighborhood, says that the promotion is the next step in a 27-year career with Atlanta police. She now oversees a diverse division that’s responsible for police at the airport to DUI task forces and traffic fatalities. The division also includes the newly-formed Community Oriented Policing Section, a unit supported by a federal grant that includes six officers and is expected to grow to 50 to build grassroots relationships with residents and bolster community oriented police efforts across the city. 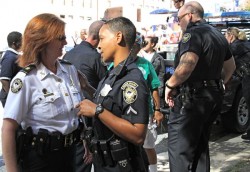 “I’ve been to the airport and I’ve worked special operations, so I feel like I have an understanding and good handle on both of those. The COP section is new and it is an incredible opportunity for this police department and this city to build on all of those great partnerships that we’ve built out there,” Propes says. Under Turner, the department has taken action to improve its relationship with gay residents since the botched raid of the Eagle. Two LGBT liaisons have been appointed, the most ever for the department; a nine-member LGBT advisory board met for the first time Sept. 20; the agency has improved its procedures for involving its LGBT liaisons in bias crimes; and Turner took part in a public forum in July to discuss concerns from gay and lesbian residents. The department, though, still hasn’t released the results of an internal investigation into the Eagle raid and Turner has yet to take action on recommendations from the Atlanta Citizen Review Board to sanction some officers involved in the Eagle raid. The city and police department also face an increasingly contentious lawsuit over the raid. 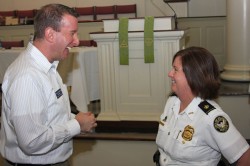 Propes says that while she’s an openly gay presence at the department, it’s her long list of training and wide-ranging experience that led to the promotion to replace a retiring deputy chief and not an effort to appease LGBT critics of the agency. “The fact that I am gay person doesn’t define who I am. I am a very well-rounded, well-qualified person and I am taking on this role because I am qualified, not because it’s let’s pick the gay girl,” Propes says. Photos: Deputy Chief Renee Propes (top photo left; second photo) at the Pride parade on Oct. 10; Propes with LGBT liaison Officer Patricia Powell (third photo) at the parade; Propes speaking to gay then-City Council candidate Adam Brackman (bottom photo) during an October 2009 forum about the Eagle raid.