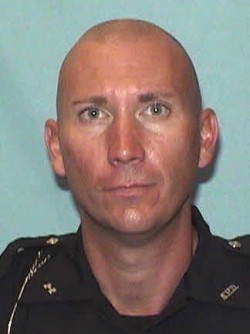 A second LGBT liaison for the Atlanta Police Department started his assignment Thursday amid continuing questions over the fate of a past liaison who has been on leave for nearly six months.

Brian Sharp (photo), an officer for three years who worked a beat in northeast Atlanta, started his role as the department’s second liaison on Thursday, marking both the first time Atlanta police have had a gay man in the role and two active liaisons at the same time. Sharp’s appointment meets a pledge by Mayor Kasim Reed and police Chief George Turner to have at least two LGBT liaisons in the department.

“I expect Officer Sharp to expand on the great work and tireless efforts Officer Powell began in May to help us continue to build bridges of cooperation and understanding within the GLBT community,” Turner says in a press release announcing Sharp’s appointment. “There is plenty for him to do. Our work truly has just begun.”

Sharp joins Officer Patricia Powell, who was appointed LGBT liaison on May 4. His appointment comes less than two weeks after police officials reiterated their pledge to name a second liaison during the inaugural meeting of APD’s LGBT advisory board. Sharp has also worked as an administrator in a youth detention facility and retail and restaurant management. The native of Rome, Ga., has a partner and is involved with PFLAG.

“I’m committed to making sure that all Atlantans feel safe and are treated with respect in our great city,” Mayor Kasim Reed says in a prepared statement. “The gay community has made tremendous contributions to the social, cultural, political and economic fabric of Atlanta. I’ve said it before and I’ll say it again, ‘I won’t stop until our police department is looked upon as a model for GLBT community relations in the nation.’ I know we can get there.”

The announcement of Sharp’s appointment was made without mention of Officer Dani Lee Harris, who served as LGBT liaison for more than five years until she was placed on leave in April. The move, along with Powell’s appointment, wasn’t made public until questioned by LGBT activists and media. Harris says she was pushed out days after filing a complaint with APD’s internal affairs unit alleging that a civilian employee used abusive language and discriminated against her based on gender identity and sexual orientation. Police officials have said Harris’ three gran mal seizures since December prompted her leave.

“I didn’t do anything wrong,” Harris says in a recent interview with Project Q Atlanta. “All I did was serve the community I love for five years and got punished for it.”

Since her leave, the department has refused to publicly discuss her status either as LGBT liaison or an officer. Harris also filed a complaint with the Atlanta Citizens Review Board, which rejected it Sept. 9 after ruling that it didn’t fall under their jurisdiction. Her status was raised again Sept. 20 during the first meeting of APD’s LGBT advisory board.

Harris says she is considering suing the department and eventually making public a recording of the alleged discriminatory tirade she faced from the civilian employee. But for now, her attorney is attempting to work with the police department to return Harris to her post.

“My attorney is trying to get them to do the right thing. They are making it worse by not responding and continuing their retaliation,” Harris says.

But Harris adds that her leave without pay could end Oct. 14 – the point at which she would be seizure-free for six months and could be examined by physicians to see if she meets the department’s fit-for-duty standards.

On Saturday, Harris is asking supporters to join her for a benefit at the Power Center to raise much-needed funds since she’s been out of work since April.