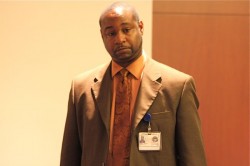 That flash of light that Bennie Bridges sees? No, not the blue lights atop the Cobb County police car that busted him for DUI. It’s his career dissipation light. It’s burning bright these days. Bridges (photos), the troubled investigator for the Atlanta Police Department that led the botched raid of the Eagle, was arrested Thursday in Cobb County on charges of driving under the influence, possession of less than an ounce of marijuana and speeding in excess of 100 miles per hour. The charges were first reported Saturday by Stephanie Ramage, a reporter who covers City Hall and Atlanta police, and who has written extensively about the Eagle raid.

You saw it here first: The Atlanta Police Department’s lead investigator in its raid on the Atlanta Eagle bar has been arrested in Cobb County on charges of DUI, possession of marijuana and speeding while driving an undercover police vehicle.? [UPDATE: The Ramage Report has learned that the car may have been intended for use in a joint task force on "special victims" between the APD vice unit and federal law enforcement. "Special victims" may include everything from victims of human trafficking to children forced into prostitution.]? According to Cobb County Sheriff’s Office booking reports, Bennie Evett Bridges, 41, was stopped Thursday a little before 3 a.m. for speeding in excess of 100 miles per hour and Cobb Police officers subsequently charged him with possession of less than an ounce of marijuana as well as driving under the influence of alcohol. 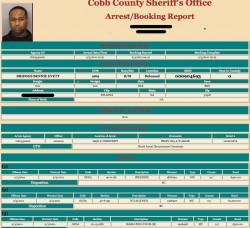 Atlanta police say Bridges is now on administrative leave with pay, telling the GA Voice that the matter has been referred to the department’s Office of Professional Standards. The department declined further comment about Bridges, but did add this caveat to bolster Chief George Turner’s tough stance on rouge cops:

Chief Turner expects Atlanta police officers to follow the laws they are sworn to uphold and enforce. Failure to do so will result in disciplinary action.

That’s tough talk from Turner, who’s been doing a lot of it recently where it concerns the Eagle case and recent allegations that officers from his Red Dog Unit fondled and strip searched male drivers during traffic stops. But the talk stands in sharp contrast to Turner’s actions. Let’s review: • Bridges is one of scores of officers included in a damning report from the Atlanta Citizen Review Board calling for reprimands and suspensions for officers and supervisors involved in the Eagle raid. The recommendations were made on Jan. 20. Turner, who has yet to react to them, has until mid February to respond. But the ACRB has three times in past months called for punishments against officers in the Eagle raid and Turner hasn’t taken action. The police department’s internal investigation into the raid hasn’t been completed in the 17 months since the raid. • The discovery process in the federal lawsuit over the Eagle raid uncovered evidence that Bridges was among officers that deleted text messages from their cell phones relating to the raid after a federal judged ordered them to produce the phones for inspection. 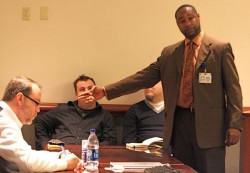 • During the trial last March of the eight men arrested in the Eagle raid, Bridges testified that the Red Dog Unit was brought to the bar to “hold everyone” as part of the police investigation. “What [Bridges] really said is that they had already made the decision to hold everyone at the Eagle before they even left the precinct house, before they had any idea whether anyone was breaking the law or not,” Dan Grossman, the lead attorney in the Eagle lawsuit, said in March. “They didn’t care whether these guys were suspected of criminal activity. They decided to hold them before they even showed up. I can’t think of a clearer statement about how little they cared about probable cause.” • It was the testimony of Bridges and Sgt. John Brock during the March trial that undermined the city’s prosecution of the Eagle 8 and contributed to the case’s collapse. Bridges could not identify or misidentified several of the Eagle 8 defendants and said during the trial that he did not make nor hear other officers using anti-gay slurs, as patrons of the bar have alleged. • In June, the ACRB recommended Brock be suspended for three days and Bridges reprimanded for their role in the raid after the panel sustained a complaint from a manager at the Eagle. Turner hasn’t acted on those recommendations. • Bridges has had trouble with alcohol in the past. He testified during the Eagle 8 trial that he bought four drinks at the Eagle the night of the raid, but only sipped each one briefly before throwing them away. But he and Brock have face a litany of complaints filed against them over the years and Bridges has been suspended several times for incidents that included alcohol.