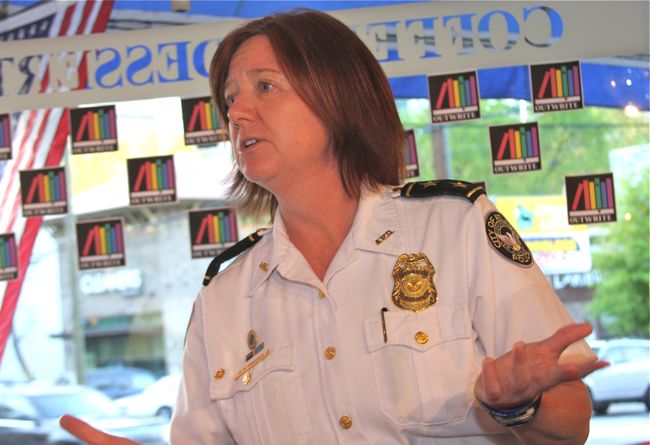 Top commanders from the Atlanta Police Department and the agency’s two gay liaisons faced questions from LGBT citizens on Wednesday as they continue to repair an image tarnished from the botched Eagle raid.

The event at Outwrite Bookstore was billed as a public meet and greet for Atlanta police’s two LGBT liaisons and the agency’s nine-member gay advisory board. But the 90-minute session quickly turned into a showcase of the agency’s willingness to face head-on lingering concerns about its approach to LGBT issues. 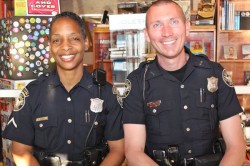 Deputy Chief Renee Propes (top photo), a lesbian recently promoted to the department’s command staff, fielded questions and was joined by two majors – including the new commander of the agency’s reconstituted (and renamed) Red Dog Unit – and several openly gay and lesbian officers.

The crowd of officers at the event also included at least one, Brian Walters, who was a member of the Red Dog Unit in September 2009 and took part in the Eagle raid. He was among Atlanta police officers named in a later federal lawsuit over the raid.

“We are working to rebuild relationships and are struggling with that not just in this community but in every community,” said Propes, a police major popular among the public who was promoted to one of four deputy chiefs last November. Propes is the highest-ranking openly gay person in the department.

“This is a great new fresh restart on these meet and greets. This will be the first of many to come,” Propes said.

The department’s two LGBT liaisons, Officers Brian Sharp and Patricia Powell (second photo), discussed the ongoing training on LGBT issues that they are providing to every civilian and uniformed officer in the agency. The training takes place four days a week, and by May, Sharp said they hope to complete the process.

The training includes a brief history of the Stonewall riots and discusses the harassment LGBT people sometimes experience. The lesson plans used by Sharp and Powell have been criticized for including the term “transvestite,” which is considered pejorative and offensive by some gay people.

The training has included a session with the department’s new Atlanta Proactive Enforcement & Interdiction (APEX) unit, which replaced the Red Dog Unit. Chief George Turner disbanded Red Dog earlier this year after allegations that some of its officers, including ones involved in the Eagle raid, fondled and harassed drivers during traffic stops.

The specialized training for APEX included discussions with Tracee McDaniel, a transgender activist and member of the department’s LGBT advisory board, and representatives of Someone Cares, a non-profit that provides HIV outreach efforts to people of color and transgender people. 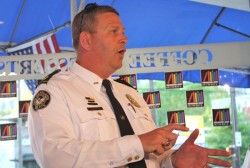 The LGBT training also includes rookie police officers during their initial training with the department. Sharp and Powell hope to add a refresher course for all officers.

“We had to start somewhere,” Sharp said. “It’s never been done before. That is the catalyst for greater things to come. We haven’t come up with a model as far as what we are going to do [in the future].”

Propes said Sharp and Powell, along with the agency’s Hispanic liaison officer, are being moved to her Community Services Division. That division also includes a new Community Oriented Policing Section, a unit supported by a federal grant that is expected to grow to 50 officers to build grassroots relationships with residents and bolster community oriented police efforts across the city.

Sharp said that while the agency is teaching its officers not to stereotype LGBT people, it’s also critical that the public see the agency’s efforts to repair itself.

“We don’t want to labeled because of how we identify, but we do that as a community to other people. I try to ask that you keep an open mind. Let us prove ourselves and prove that we want to work with you, not against you,” Sharp said.

But Atlanta police still face fallout from the agency’s raid of the Eagle in September 2009. The city settled the federal lawsuit for $1.025 million in December, along with conditions calling for an investigation into the raid and improved training for officers. The police department never made public its internal investigation into the raid prior to the settlement of the lawsuit; it has yet to complete the probe included in the settlement. Turner has repeatedly refused calls to discipline officers involved in the raid despite evidence of their mistreatment of patrons inside the bar and their illegal search of people there during the raid.

The department’s replacement for Red Dog, APEX, includes up to 10 former Red Dog members among a roster of officers that will eventually grow to about three-dozen. But Major Chris Leighty (third photo) told participants at the Outwrite event on Wednesday that the tactical unit has new commanders and officers who had to undergo a rigorous process to be selected for APEX.

“We are willing to come out and meet folks wherever they want,” Leighty said. “This is a positive first step. We are going to enforce things, but we are going to do it the right way.”

“I’m a country kid, so I have seen things in Atlanta, Ga. in 22 years that sometimes would make you wonder why people do what they do. It doesn’t matter anybody’s … sexual orientation, we all deserve to be safe in in our community,” Leighty added.

But Leighty, a former SWAT commander who oversees APEX, said the new unit includes three former Red Dog members that took part in the Eagle raid. While he said the background of the officers “was fine,” he was “not sure of their role” in the raid. 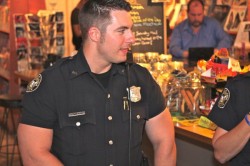 One of the former Red Dog officers, Walters (bottom photo), was among several uniformed Atlanta police officers on hand at the Outwrite event. In a brief interview, Walters said he was a member of Red Dog for about a month before the raid. He denied allegations that he was one of the officers that brandished their weapon and pointed it at patrons.

“I was at the back porch to make sure nobody came in,” Walters said. “I was on the outside, not the inside. I’m not sure where the allegation came from.”

Dan Grossman, one of the attorneys who filed the lawsuit over the raid, said the meet and greet was a positive step. But Grossman, who has since represented people who lodged complaints against Red Dog in the days leading up to its disbanding, said Atlanta police still need to take more substantive actions to address the problems uncovered by the raid.

“I support everything they did tonight,” he said after the Wednesday event. “It was a good positive step. It’s just not enough. Real reform requires other things.”

“What really matters is when APD starts disciplining officers for breaking the law and lying,” he added.