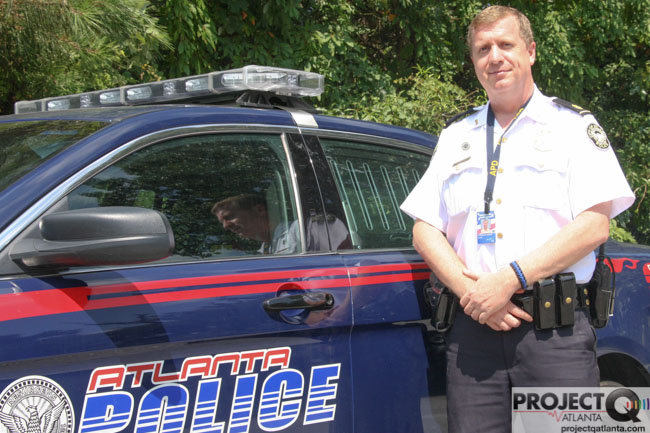 Blake's, Ten, G's and 10th & Piedmont were shut down about 12:30 a.m. on Monday – some two hours ahead of closing time – as Atlanta police showed up in force to the intersection of 10th Street and Piedmont Avenue. That's where hundreds of Black Gay Pride participants were enjoying nightlife options after the day-long Pure Heat Community Festival in Piedmont Park.

Early Monday, though, police commanders ordered the bars and restaurants at the Midtown intersection to close. The incident has sparked outrage from business owners who operate near the intersection.

James Nelson, the owner of Ten, said the incident was a case of discrimination and pointed to non-LGBT bars around Piedmont Park that were allowed to remain open.

“There were probably 400 African-American gay men and women standing on the sidewalks in front of G's and 10th & Piedmont and the Blake's parking lot. They clearly wanted to shut that down,” Nelson said. “I've been in business far too long and i know what happened on Sunday night.”

“This was clear, this was racially motivated and discrimination. We are the only businesses that were shut down in the entire city,” he added.

“They pulled up in paddy wagons and began clearing the sidewalks. Really, it was an intimidation tactic at first,” Nelson said.

Nelson and other business owners presented officers and a police commander with the city ordinance that allows the bars to remain open until 2:30 a.m. But they ignored it and forced the businesses to close, Nelson said.

“We've been doing this for years – everyone has,” he said. “It was an abrupt closing and I want to make it clear that we were operating legally.”

An Atlanta police spokesperson said the agency was concerned with the safety of the large crowd as it spilled onto the streets. But when commanders moved to shut the businesses down early, they made a mistake, according to Carlos Campos, the public affairs director for Atlanta police.

“Closing the bars early was – very simply – an honest mistake based on a communication failure,” Campos said.

The agency should have made its commanders – the ones that ordered the closure of the businesses – aware of the extended holiday operating hours, Campos said.

“The morning watch supervisors should have been aware of the City Council’s extension of bar hours for the Labor Day weekend, but they were not. The department sincerely apologizes to the affected business owners and their patrons,” Campos said.

In the wake of the incident, Major Darin Schierbaum (photo) – who took over as Zone 5 commander on Thursday – will be meeting with the business owners impacted by the closings to apologize in person, Campos said.

Schierbaum, who has also served as head of the agency's training academy, is one of the highest-ranking openly gay commanders in the police department. In 2015, he helped update homophobic and anti-trans materials used to train new police recruits. In 2009, he was among Atlanta police officials who met with LGBT residents and activists to repair the department's image in the wake of the Eagle raid.

On Monday, the incident happened at the same intersection where the city – to much fanfare and applause – installed rainbow crosswalks in July. Mayor Kasim Reed called the installation an important symbol “to reaffirm our unwavering and unqualified support for our LGBTQ residents.”

We've reached out to Blake's and will update the post when they respond.

“The bars came to the attention of the morning watch commander – an openly gay male – because crowds in the area were spilling out onto the streets, causing potential public safety hazards. Any notion the bars were targeted because of their clientele is unfortunate and simply not true,” said Carlos Campos, an Atlanta police spokesperson.

UPDATE | City Council member Alex Wan, the only openly LGBT member of the council, called the incident disappointing. Wan represents District 6, which includes some of Midtown and a portion of the 10th Street and Piedmont Avenue intersection where the incident unfolded. He also pledged to introduce City Council legislation allowing bars to remain open past the 12:30 a.m. closing time on Sunday during Atlanta Pride in October.

“I learned just this morning of the Monday morning early closures of the bars/restaurants at 10th and Piedmont,” Wan said. “I immediately communicated my extreme disappointment directly to the Zone Commander that these establishments in our community were impacted. APD has assured me that they are enhancing their deployment and communications protocols to prevent this from happening again, and I will follow that closely, particularly as I am introducing legislation today for extended hours on Pride weekend.”