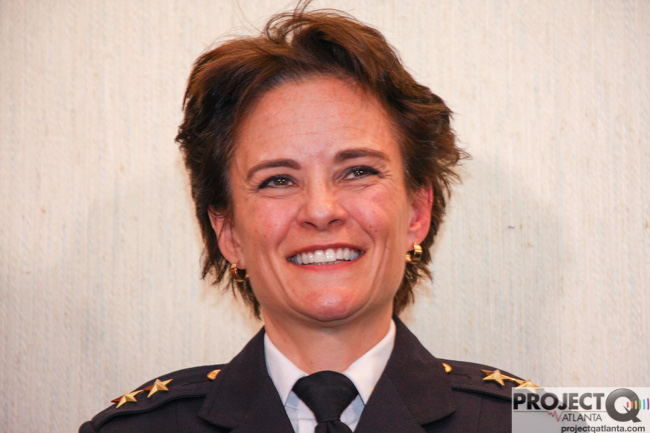 Police Chief Erika Shields came out as a lesbian in a new magazine profile, becoming the first-ever openly gay top cop at the Atlanta Police Department.

Mayor Kasim Reed named Shields the city's new chief in December to replace a retiring George Turner. Shields and the mayor didn't mention at a press conference announcing her promotion or in subsequent media interviews that she is gay. But Shields makes it clear in an Atlanta magazine profile published this week – likely the first public confirmation that Shields is gay.

In the waning months of a lame duck mayor’s term, a time when other city officials are packing their boxes or polishing their resumes, Shields, the APD’s first openly gay chief and the second woman to lead the force, is chipping away at an ambitious agenda for the 1,850-officer department—one that could please both policing reform advocates and cops.

It was a surprisingly low-key pronouncement in an administration that touts its work with LGBT residents, its advocacy on LGBT issues and its year-after-year perfect score on the HRC Municipal Equality Index. Atlanta police have had two LGBT liaisons for several years and at least one openly gay deputy chief. In 2015, two LGBT commanders were promoted to majors, including one who heads the agency's training academy.

The Atlanta magazine profile didn't dwell on it or note the importance of Shields coming out. But it did detail her 20-year rise through the department.

Over the next 20 years, Shields climbed the ranks, working with or leading APD divisions including internal affairs, narcotics, and the Video Integration Center, the department’s downtown panopticon where cops monitor nearly 8,000 public and private surveillance cameras. In those jobs, according to fellow cops and even watchdogs, she proved herself to be a details-oriented policy wonk who could also think big, someone who believed in the rules of policing but also knew when to revise them. After a controversial paramilitary unit was hit with lawsuits alleging stop-and-frisk violations, says former Police Chief George Turner, Shields was the first member of his top brass to step up and suggest he dismantle the force. Shields was overseeing 911 officers and zone precincts when the mayor picked her to succeed Turner, saying she “has the foundation to be one of the best and most qualified leaders in the country.” She joined an exclusive club: Of the country’s 50 largest police departments, only five are led by women.

Shields said in December that she's proud of the progress Atlanta police have made in repairing relationships with LGBT residents since police raided the Eagle in 2009.

Shields has had a front row seat to the aftermath of the Eagle raid as she served as Turner's chief of staff. In 2011, Turner tasked Shields with cleaning up the mess the raid left behind. That included compliance with the terms of a federal lawsuit filed over the raid, which the city and the police department have sometimes struggled with.

In June 2016, Shields joined Reed and Turner during a meeting with nearly three-dozen LGBT leaders and business owners to discuss public safety issues in the wake of the massacre at Pulse, a gay nightclub in Orlando.

“One of the best days we had, unfortunately brought on by the tragedy of the Pulse shooting, was the comfort that leaders of the LGBTQ community had in coming into City Hall and sitting around and having a conversation for two hours, sharing some of the most intimate feelings that you could share. I thought that was a huge moment in the life of the city and I think that we got to that space because of the leadership of Chief Turner and his command team,” Reed said in December when he named Shields the city's police chief.

“It was Chief Turner and Deputy Chief Erika Shields by my side helping to address the anxiety that was genuinely felt within the LGBT community,” Reed added.

Shields has marched along with LGBT officers in the Atlanta Pride parade, including the event in 2011 (second photo).

We reached out to Atlanta police with questions about Shields' public coming out and will update the post if the agency replies. 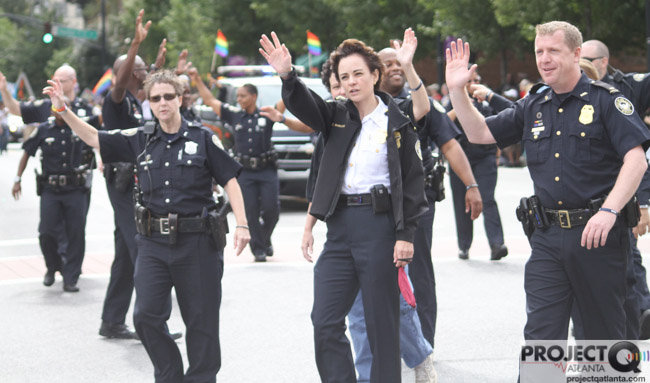