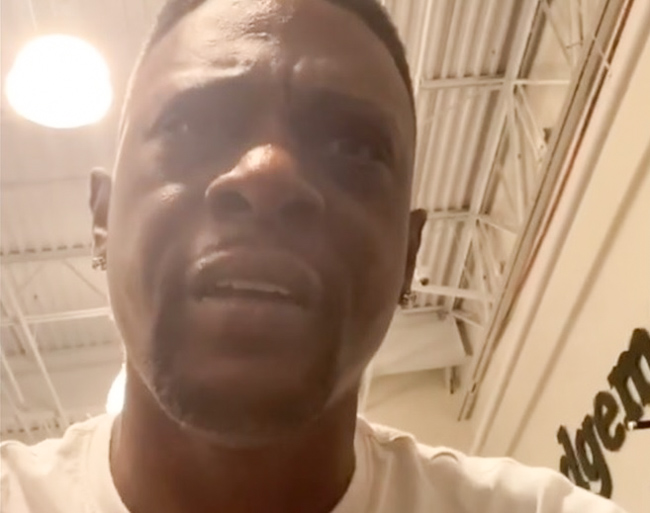 A Planet Fitness in Jonesboro kicked popular rapper Boosie Badazz out after he posted a vile anti-transgender rant to his nearly 7 million Instagram followers.

The entertainer (photo) posted the video on Feb. 18 as he cycled at the gym on Tara Boulevard under a “No Judgement Zone” sign. Badazz was ranting about the transgender daughter of retired NBA star Dwayne Wade.

Wade had recently discussed supporting his daughter Zaya in an interview on “Good Morning America,” according to Hip Hop DX.

“I gotta say something about this shit. Dwyane Wade, you’ve gone too fucking far, bro,” he said. “That is a male. A 12-year-old. At 12, they don’t even know what they next meal gonna be. They don’t have shit figured out yet. He might meet a woman at 16 and fall in love with her, but his dick be gone.”

Badazz returned to the gym several days later but was denied entry. He then posted another Instagram video from the gym parking lot using homophobic slurs while blasting the business.

“Do not go to Planet Fitness,” he said. “They racist. They haters. They just put me out Planet Fitness because of what I said about Dwyane Wade’s son. And they said I seen a video of me saying one of their employees was faggots or some shit.”

Planet Fitness “does not tolerate harassment or discrimination of any kind,” according to a statement from McCall Gosselin, senior vice president of communications.

“In this instance, a guest was asked to leave after refusing to comply with gym policies and harassing club staff,” Gosellin told Project Q Atlanta. “We are the home of the Judgement Free Zone and as such, we have policies in place to ensure that we maintain a non-intimidating, welcoming environment for all of our members where everyone feels accepted.”

Badazz’s real name is Torrence Hatch Jr., according to 11Alive.

Wade and his wife, actress Gabrielle Union, have been outspoken about supporting Zaya. Union posted the video below on Twitter of Dwayne and Zaya on Feb. 11. Zaya talks about being yourself and getting through hard times.

Meet Zaya. She's compassionate, loving, whip smart and we are so proud of her. It’s Ok to listen to, love & respect your children exactly as they are. Love and light good people. pic.twitter.com/G2lLVdD2VT