Atlanta pastor: ‘Not the time’ for a gay president 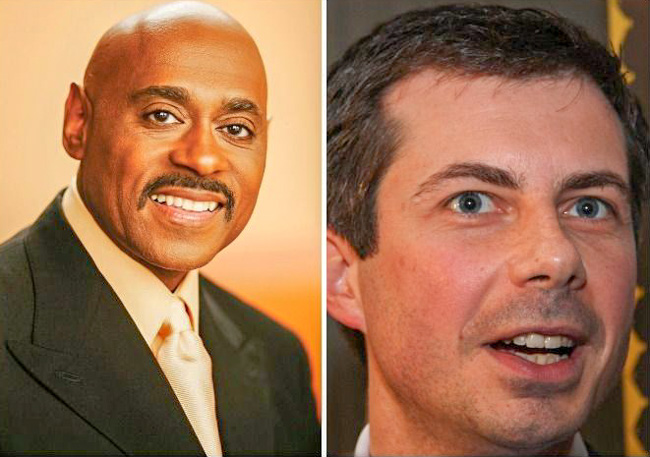 The pastor of an Atlanta megachurch discouraged people from voting for Pete Buttigieg because he’s gay, then insisted he’s not homophobic.

He is the founder and senior pastor of Changing a Generation Full Gospel Baptist Church on Greenbriar Parkway in Southwest Atlanta.

Morton (photo left) posted the message on Twitter on Saturday, writing in part, “It is definitely not the time 4 POTUS 2b a man with his husband up there by his side. There are those of us who love everybody but believe in the biblical definition of marriage.”

Dems I pray U will use wisdom in voting. Being too liberal will not win. I am not Homophobic. But it is definitely not the time 4 POTUS 2b a man with his husband up there by his side. There are those of us who love everybody But we believe in the Biblical Definition of Marriage

A backlash proceeded from there, but Morton claimed he’s just “following [God] and His Word.”

If I am homophobic God is too. All I know is I’m following Him and His Word. I know He loves The World and I do too. But I will not go against God’s Word to please you or no one else https://t.co/QSBkqRzDQH

Morton later called it “political suicide” to vote for Buttigieg. He then conceded that the U.S. would elect an LGBTQ president one day, but that 2020 isn’t the time.

Whether U like it or not U need traditional marriage voters too. Without condemning & trying 2 make us denounce the bible. Life is about timing. Will it ever happen? Yes the bible says world will wax colder or for others, interpretation warmer but 2020 election is not the time

Morton is also the co-pastor of Greater St. Stephen Full Baptist Church in New Orleans, La. He is the father of Maroon 5 keyboardist PJ Morton, according to Offbeat Magazine.

Buttigieg came to Atlanta in June to speak at the African-American Leadership Council Summit, where he said that Georgia was “on the cusp of becoming a blue state.” He also attended three fundraisers, including one with several LGBTQ Atlanta hosts that garnered over $100,000.

He returned to Atlanta in August for a conference with African-American church leaders and thousands of black millennials. HGTV star Vern Yip and his husband also hosted a high-dollar fundraiser for Buttigieg at their Brookwood Hills home.

He'll be back in Atlanta on Nov. 20 to take part in the next Democratic presidential debate at Tyler Perry Studios.