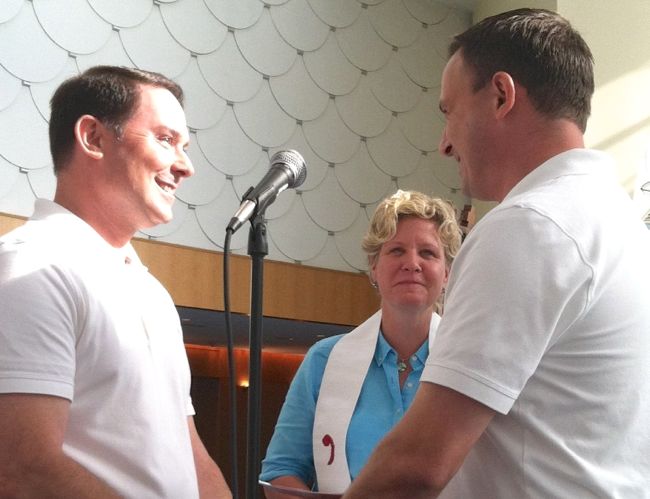 Gay couples still can't get married in Georgia despite the Supreme Court's pair of rulings, so an Atlanta pastor did the next best thing: Help marry a gay couple with ties to the city in California. With a Pink song.

Rev. Susannah Davis (photo center), pastor at the United Church of Christ in Kirkwood, co-officiated the marriage of Jay Greaves and Rev. Dave Sigmund (photo right) on Sunday in Long Beach. The ceremony came just two days after gay marriages resumed in California following the Supreme Court's June 26 ruling in the Prop 8 lawsuit. It was made possible when Supreme Court Justice Anthony Kennedy on Sunday denied the request of same-sex marriage opponents to halt marriage licenses being issued.

Greaves and Sigmund, a couple for 10 years, have ties to Atlanta. Sigmund was ordained two years ago after studying at Emory's Candler School of Theology. The couple's home church is Kirkwood's UCC, so Davis officiated along with longtime LGBT activist Rev. Mel White.

As the ceremony began, White talked about the importance of the wedding, "not just for these guys and the obvious love they have for each other.  We need to remember those who died (before marriage equality) and did not have their relationship recognized.  Remember the great cloud of witnesses who surround us."

When White asked the people of Seaside UCC to do everything in their power to uphold and care for the couple, he got an enthusiastic response. But when Davis then posed the question to the people of the UCC gathered at this National Synod, she got a resounding roar of affirmation from the crowd.

And in case the moment wasn't gay enough, there's this: glitter!

Both men read personal vows to each other after a church member sang a rendition of pop artist Pink's song, "Glitter in the Air."

"You are my best friend and the great love of my life," Sigmund told Greaves. "Today I give you my pledge and my promise as I give you this ring: To have and to hold. To call you my Boo."

And if you'd like to be reminded of just how long it might be before your gay marriage in Georgia, Lambda Legal and Georgia Equality host a town hall on the topic on Tuesday. Don't expect wedding bells, or a Pink song, anytime soon.

What do the Supreme Court decisions on Prop 8 and DOMA mean for Georgia?  How can build the movement we all deserve here at home? In a town hall meeting, we will be answering questions about the legal and political ramifications of these decisions.  A Lambda Legal attorney will answer questions about what this means for LGBT couples living in Georgia who are already married or looking to get married. We'll also talk about strategies for building the movement and what you can do to help.