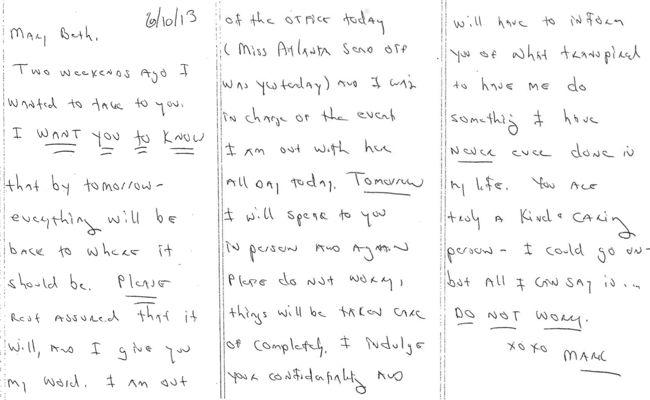 As the gay man who oversees the Miss Atlanta Pageant was preparing his beauty queen for her run at the Miss Georgia title last month, he was furiously working behind the scenes to stay out of jail. It didn't work.

Mark Castleberry's entrant into the statewide pageant, Miss Atlanta Carly Mathis, went on to win Miss Georgia on June 22. Less than three weeks later Castleberry, 54, was arrested and charged with theft by taking and burglary. He surrendered to Chamblee police on July 11, two days after a detective told him he would be charged with stealing nearly $12,000 from a longtime friend and office neighbor by forging checks he allegedly admitted to stealing from her office.

Castleberry was released the same day on $10,000 bond. The case is now under investigation by the DeKalb District Attorney's Office, a spokesperson said.

Police say Castleberry admitted to them and Mary Beth Hebert that sometime in May he snuck into Hebert's office, stole the checks, wrote them to himself, forged her signature and cashed them in amounts ranging from $250 to $6,500. The checks totaled $11,800. Hebert, an attorney, had an office in the same Perimeter Park Drive building where Castleberry operates his Bank Marketing Associates and knew him casually for 15 years.

Hebert only discovered the theft when Castleberry allegedly admitted to her what he had done. That confessional started with a cryptic note, seen above with a larger version below, that Castleberry left in Hebert's office. He later told Hebert what he had done, described how it took place and then took part in weeks of back-and-forth emails with her as he attempted to pay her back and avoid being prosecuted, Hebert writes in a summary provided to Chamblee police.

“I found the note labeled (by me) '6/10/13' on my desk on that date, which was a Monday. I did not understand what it was about. Mark and I have both had office space at this address for over 15 years, and have been casual acquaintances, but we are not especially close, so I didn't have a clue what the note was about.” 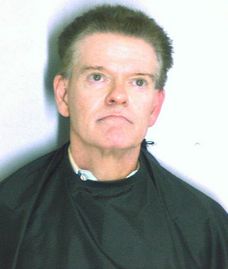 When Castleberry met with Hebert two days later, he confessed, she tells police.

“He came down immediately and started apologizing, and telling me that he had no idea why he had done it, and just rambling. I said, 'Mark, what did you do?!' He said, 'You don't know?' and I said 'I have no idea.' He then proceeded to tell me that a few weeks earlier (he didn't specify when), he had gone into my office at night, when the cleaning crew were there . … He had looked for and found my checks (I asked what checks and he pointed to the cabinet in which I keep my IOLTA (Trust Account) checkbook. I said 'You took money from my trust account?' and he just started apologizing again and telling me how he didn't know what possessed him, etc. etc.”

But Castleberry also swiped one of Hebert's deposit slips so he could repay the money he allegedly robbed her of.

“After that, our conversation is kind of a blur. I was in such shock, and all I remember was he kept promising to pay me back and telling me how he didn't know what possessed him. He did tell me that he had also taken a deposit slip, so he could repay me.”

Hebert hesitated to report the theft to police, fearing that if she did, Castleberry wouldn't follow up on his promises to pay her back. On June 15, three days after he apparently confessed to the theft, Hebert emailed him to ask about the repayment. She received excuses about beauty queens.

“He replied on 6/16 and said he'd been busy with Miss Atlanta at the Miss Georgia pageant (he is the Director of the Miss Atlanta program and it turned out Miss Atlanta won and is now Miss Georgia). But, he assured me that the funds would be there on Monday, 6/17.”

Hebert also told police she was concerned that Castleberry may have stolen funds from the Miss Atlanta Pageant, where he serves as director. Since his arrest, Castleberry's name has been scrubbed from the pageant's website. Castleberry has also served as director of the gay Dixie Bowling League and a board member of the International Gay Bowling Organization, according to his LinkedIn profile.

In late May, after he apparently deposited the stolen checks, Castleberry competed in IGBO's annual tournament held in Tampa. He placed 186 out of nearly 700 bowlers in the singles event. While continuing to delay his promised repayments to Hebert, he took part in the Miss Georgia Pageant on June 22 in Columbus and the Peachtree Road Race on July 4.

“I would have reported this sooner, but I did not believe there was any chance Mark would repay me once I turned him in, and I needed the funds. Mark is behaving as though nothing ever happened, and he needs to understand the gravity of what he did. I understand that he will probably not serve any time in jail, but I do want him arrested and prosecuted (though I understand he will plead out and not be tried). I don't know if he is on drugs, or what has happened, but he really needs the wake-up call, or this will certainly happen again (to someone).”

“I later met with Mark Castleberry at his office and told him that Ms. Hebert had reported a theft of business checks from her office afterhours and stole 9 checks from her Trust Account and that he wrote said checks out to himself (totaling $11,800). He said that he has since repaid [Hebert] and was deeply embarrassed. He admitted that he was in a financial bind at the time and needed the money.”

Castleberry and officials with the Miss Atlanta Pageant could not be reached for comment on Wednesday.