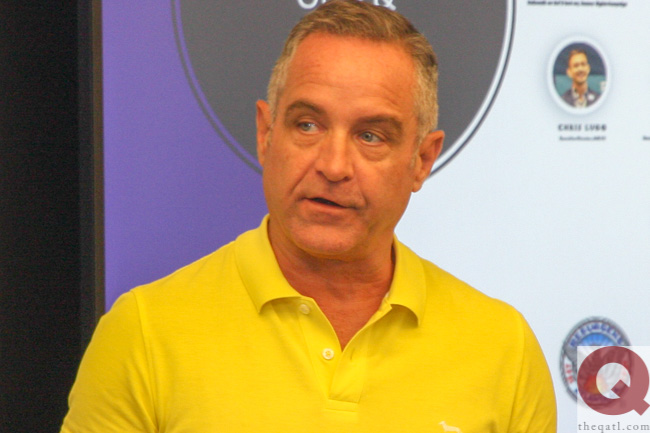 The plans were announced at the board’s retreat on Sunday at Coca-Cola's headquarters in Downtown Atlanta. The training will include resume writing, interviewing and tips on professional work attire, according to board co-chair Pam Stewart.

“It’s more like an expo where we bring businesses, the community and the city together in order to provide employment opportunities,” she told Project Q Atlanta.

The goal is to make the Opportunity Fair an annual event.

“So our focus the first year will be on employment preparation for the community,” Stewart (second photo, standing second from right) said. “The next year will be potentially on financial investing and resources and savings.”

The event will take place in mid-2020. More details will be available at the board’s next meeting in December, according to Stewart.

Bottoms formed the board in May 2018 with a mix of LGBTQ faith leaders, non-profit leaders, business leaders, activists and politicians.

Georgia Equality Executive Director Jeff Graham asked at the retreat that Bottoms speak out about a case before the U.S. Supreme Court that would affect the rights of LGBTQ workers. Oral arguments in the case, which involves an Atlanta man fired from his Clayton County job for being gay, take place Oct. 8.

“This is a big case nationally that’s not on many people’s radar,” Graham said (second photo, back row middle). “But frankly, depending on how the Supreme Court rules, it could be horrible. It could actually be very expansive.”

Graham offered to work with Bottoms’ office on a statement to issue the night before oral arguments in the case.

“Frankly this is where the politics of the Supreme Court come in,” he said. “The more public awareness and the more public conversation there is, that actually can have an influence on how they ultimately rule on this.”

“I think you’re right on point,” he said. “That’s a terrific opportunity for the City of Atlanta to show some leadership there.”

Jon Keen, the city’s deputy CFO, appeared during a portion of the retreat closed to the public to give an update on the city’s HIV housing program, according to board co-chair Kirk Rich (photo).

The city has had trouble for years with distributing funds from its Housing Opportunities for People With AIDS (HOPWA) program to local non-profits. The funds subsidize the housing costs for low-income people living with HIV.

The city terminated its contract with one of its largest HOPWA agencies in July, triggering an eviction crisis that affected hundreds of people with HIV. The city launched a housing relocation effort and is in the midst of restructuring management of the HOPWA program. Some 70 percent of the victims of the eviction crisis have had their housing situation stabilized.

Keen’s appearance at the retreat was significant, according to Rich.

“The fact he was there speaks volumes to the confidence of the office that they’re moving in the right direction. We all feel like they are,” he told Project Q. “Is there room for continued improvement? Yes. The structural changes happening and the improved communication with the community and involvement with the people within the programs, those are really important things that I’ve never heard verbalized as often or as well.”

Rich defended the decision to only open a portion of the event to the public.

“We had nothing to hide, but in my experience, typically retreats are a closed session no matter how or what you do because that’s a working meeting where you’re exploring ideas,” he said. “I think it’s inappropriate for board retreats to be open meetings. I would look at that as an executive session. We went that extra mile to open that hour at the end. We were strategic in making that a board meeting, so you did get the overview of everything that happened.”

About 10 members of the public attended the open portion.

The board's first meeting in July 2018 was held behind closed doors, which led to criticism from experts on Georgia's open meetings laws. The board began holding open meetings the following month. The date for the next meeting in December is being finalized.