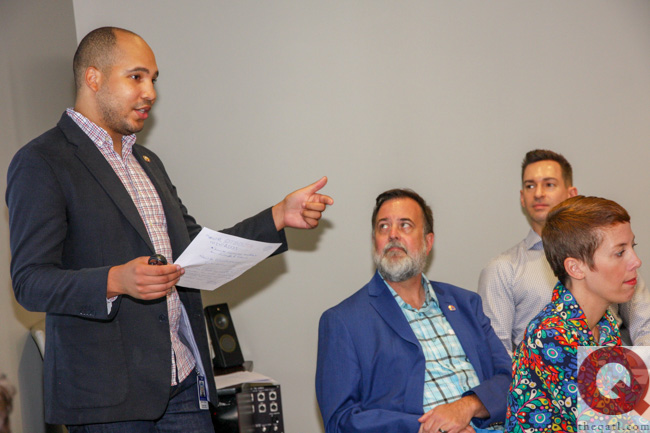 Atlanta Mayor Keisha Lance Bottoms’ new LGBTQ advisory board is narrowing its focus to five issues and promising to open its meetings to the public.

The focus on the five “meaningful pillars” – LGBTQ youth, LGBTQ health, transgender affairs, LGBTQ arts and culture, and LGBTQ economic and business development – came Friday as the 34-member board broke into working groups to discuss each issue. The early-morning session marked the board’s second meeting and came with pledges from its co-chairs that future sessions would be open to the public.

The board’s first meeting in July was held behind closed doors, which led to criticism from experts on Georgia’s open meetings laws.

Officials with One Atlanta — which encompasses the city’s equity, diversity and inclusion office — initially announced that the first hour of Friday's two-hour session would be closed to the public. But the board’s co-chairs decided at the beginning of the meeting to open it up for the entire session.

“What happened is we were supposed to do closed session but visitors arrived early and came into the room, and we were not going to ask them to leave,” board co-chair Kirk Rich (bottom photo left) told Project Q Atlanta.

Rich and board co-chair Pam Stewart added that if the board entered executive session, those portions of future meetings would be closed to the public.

“That’s just the nature of working in a big governing body,” Stewart said.

Future meetings – which will happen quarterly – will move to the old City Council chambers, which is a larger space with more room for the public, officials said.

On Friday, the board broke into working groups to discuss its five focus areas, which were developed after a survey of board members. Those working groups will eventually turn into sub-committees with two co-chairs in each.

“Today was all about structure — getting the structure down with the committees so that we can define those two or three initiatives with each committee,” Rich told Project Q. “That way we start funneling into action. The whole idea now is to get action — to define those issues and make sure that we are coming up with really, really good, clear initiatives that we can work on and have success.”

“Those are very powerful, meaningful pillars that we’ll advance every single time,” she said.

One of the issues – LGBTQ youth – was the focus of officials with Lost N Found Youth, which cares for LGBTQ homeless youth. They spoke out during the public comment portion of Friday's meeting.

“What we need from the city is money and more safe space,” said Marci Alt, Lost N Found board vice president.

“My goal this year is not to have any kids freeze. That’s my goal, but I can’t even seem to get a permit for a warming center from my city,” she added.

Several events and initiatives were announced during Friday’s meeting, including a session on the city's HIV epidemic and a slate of events during Pride that the mayor will attend.

The city will host a discussion on Housing Opportunities for Persons with AIDS funding on Aug. 21. The federal HOPWA program provides millions in grants to the city, which allocates the funds to agencies addressing the housing needs of people living with HIV/AIDS.

The discussion follows criticism over the city's handling of HOPWA funding. The city's grant manager was subsequently replaced, and Interim Director of Grants Management Karen Carter will attend.

The city will also host a briefing on the city’s HIV/AIDS epidemic on Aug. 30 at 9 a.m. in City Council chambers. Mayor Bottoms and City Council President Felicia Moore will attend.

“There’s a great agenda that they’ve got laid out to really discuss the situation in the city in terms of HIV and AIDS and what we can do to start to combat the new infections and really get a citywide plan together,” said Rashad Taylor, the city's Chief Equity Officer and One Atlanta leader.

Malik Brown, the city's LGBTQ Affairs Coordinator (top photo left), also said the mayor will host an LGBTQ reception on Oct. 8 to celebrate Atlanta Pride. The ticketed event will be free and open to the public. The mayor will take part in a public meeting with LGBTQ residents and an LGBTQ service project that week.

“We’ve got a really good, energized group of employees we’ve met with once already,” McCranie said. “They’re going to be talking about how the city’s going to be interacting with Pride as well for our float, and how the city and the mayor and APD and the fire department will be coordinating with each other at Pride and other events.”