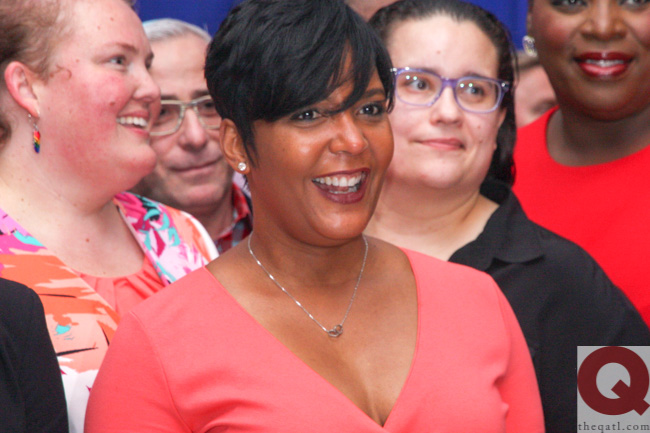 The event took place at LGBTQ-owned Flourish in Buckhead on Thursday.

Bottoms (photo) announced efforts aimed at the city’s transgender residents, including hosting the Transgender Day of Remembrance vigil next month at City Hall for the first time ever. She also presented a $10,000 check to the Trans Housing Atlanta Program.

“This digital platform is the place where LGBTQ residents, workers and visitors can find essential resources and be connected with the city on any issue they face,” she said.

Bottoms noted Tuesday’s U.S. Supreme Court hearings about extending employment protections to LGBTQ workers. A Clayton County man is a plaintiff in one of the cases.

“We’ve made a lot of progress, but we still have a very long way to go. As many of you all know, just two days ago, the Supreme Court heard three cases related to workplace equality, with one of those cases coming right here in metro Atlanta.”

Bottoms joined dozens of other mayors, including Clarkston Mayor Ted Terry, in signing an amicus brief to the court in support of LGBTQ workers.

“It is our sincere hope that the Supreme Court will land on the right side of history and not take us backwards,” she said. “We will always be a welcoming city for all. It is who we have been created to be.”

“I’ll be turning 50 in January, and I understand that Atlanta Pride will turn 50 next year, so we’re just going to party all year long,” she said.

She honored Conway, “in recognition of the enduring mark he has made on the hospitality industry and the LGBTQ community for his dedication to inclusivity, philanthropy and the City of Atlanta,” she said.

Bottoms did not mention the city’s beleaguered housing program for low-income people with HIV. The HOPWA program is under a federal investigation over the city having major delays in payments to housing agencies and sparking an eviction crisis due to a dispute with a now-shuttered HOPWA agency.

“Regardless of what happens in the Supreme Court this time, I’d like everyone here and around Atlanta to remember that what is never going to be up for debate is our human dignity,” she said. “Our community is one of resilience, of passion and Pride, and the community here in Atlanta embodies those superhero qualities like no one else.”

The Atlanta Gay Men’s Chorus and the Armorettes performed during the event.