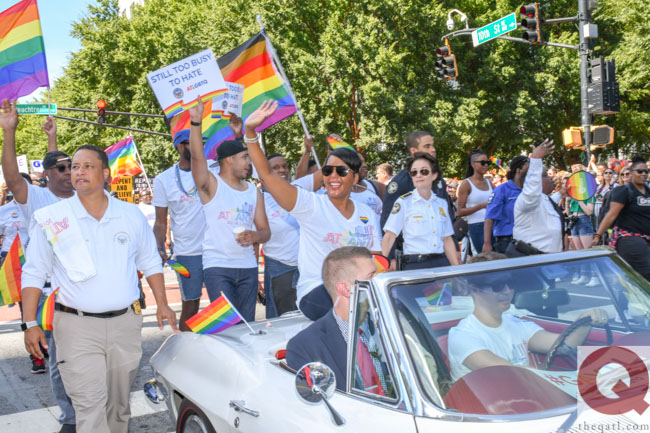 Atlanta Mayor Keisha Lance Bottoms hit back at a plan by the Trump administration to roll back recognition and protections of transgender people, saying that such protections are “in the DNA of ATL.”

The Trump administration is reportedly considering narrowing gender as a biological condition determined by genitalia at birth, according to a New York Times report carrying the headline “’Transgender’ could be defined out of existence under Trump administration.’”

“The protection of civil & human rights is in the DNA of ATL,” Bottoms (top photo) tweeted on Tuesday. “Despite the hate, the trans community #WontBeErased #TransRightsAreHumanRights”

The Trump administration plans to roll back a series of decisions made by the Obama administration expanding the legal concept of gender in federal programs.

“Now the Department of Health and Human Services is spearheading an effort to establish a legal definition of sex under Title IX, the federal civil rights law that bans gender discrimination in education programs that receive government financial assistance,” according to the New York Times report.

The Human Rights Campaign blasted the move, saying it is “setting a destructive precedent.”

“This is a direct attack on the fundamental equality of LGBTQ people and, if this administration refuses to reverse course, Congress must immediately take action by advancing the Equality Act to ensure that LGBTQ people are explicitly protected by our nation’s civil rights laws,” HRC President Chad Griffin said.

Robert Redfield, director of the Centers for Disease Control & Prevention, wouldn’t directly criticize the proposal, but when asked at a health summit whether it would hurt efforts to fight HIV, especially among trans women, he said, “We need to understand that stigmatizing illness, stigmatizing individuals is not in the interest of public health.”

The protection of civil & human rights is in the DNA of ATL. Despite the hate, the trans community #WontBeErased #TransRightsAreHumanRights

UPDATE | Georgia Equality on Wednesday responded to the New York Times report by saying it will continue to fight for the rights of transgender Georgians. The organization also called for the passage of a trans-inclusive statewide civil rights law in a statement from Chanel Haley, Georgia Equality's gender inclusion organizer.

“At a moment when transgender people are already experiencing increased levels of discrimination, harassment, and violence, this mean-spirited memo attempts to shatter any hope a transgender person like myself has of living life freely like every other American. Transgender Georgians have a hard enough time trying to survive in a state that does not provide any state-level protections.  Bullying in schools, being denied access to emergency shelters, and refusal of service by medical doctors are just some of the everyday experiences of transgender people in Georgia.

47 states currently allow and have a process in place for a person to change their gender on their birth certificate.  A stern law that would allow for “genetic testing” to determine a person's gender is overly invasive and stands in stark contrast to every American’s right to privacy.

The stakes couldn’t be higher. Now more than ever we need a fully comprehensive state civil rights law that protects all Georgians from discrimination, including transgender people. Transgender people are your neighbors, coworkers, friends, and family members.”

Georgia Equality will continue to lead efforts that ensure nondiscrimination legislation and policies in the broad areas of employment, housing, public accommodation, safe schools, access to health care, education and voter registration access are inclusive of transgender and gender variant individuals and communities. We will continue to build relationships with Elected Officials and policymakers locally and statewide and encourage LGBTQ Georgians and our allies to vote for candidates who are sympathetic to the needs of the transgender community.

UPDATE | On Thursday, the Atlanta Gay & Lesbian Chamber of Commerce released a statement “combating this blatant discrimination against our transgender and gender non-binary family, friends, community members and fellow entrepreneurs.”

1. Transgender and gender non-binary Americans deserve to have their gender identities acknowledged and respected by their government and their community

3. The Atlanta Gay and Lesbian Chamber of Commerce (AGLCC) will join the NGLCC in continuing to advocate for fair and equal economic access for all members of the LGBT business community, including our transgender and gender non-binary community members

Read the full statement from AGLCC.