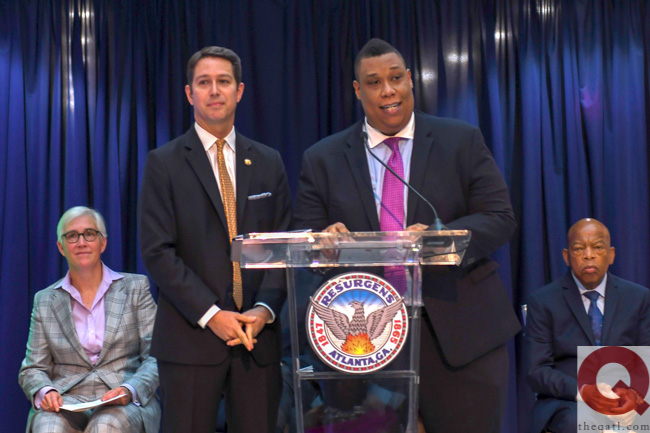 “I want you to know that you are welcomed, you are embraced and celebrated by our administration and by the city of Atlanta,” Bottoms told the crowd. “We are fully committed to the protection and advancement of our LGBTQ residents, workers and visitors.”

Bottoms ticked off a list of accomplishments, including appointing the city’s first full-time LGBTQ liaison, creating an LGBTQ advisory board and joining Mayors Against LGBTQ Discrimination.

After noting that the city allocated money in the city budget to fight HIV for the first time, Bottoms acknowledged the shortcomings the city faces in its fight against the epidemic. That included addressing long-running problems with a federal program to provide housing for low-income people living with HIV.

“We know that there is much work that remains to be done, and that is why our team is continuing to work around the clock to fix the HOPWA program to ensure that people living with HIV/AIDS have the housing resources they need,” she said.

Bottom also awarded the Phoenix Award – the city's highest honor – to Joan Garner, a public health advocate and the first-ever openly LGBT member of the Fulton County Commission. Garner died in 2017 and the award was accepted by Jane Morrison, a Fulton State Court judge and Garner's widow.

“For those of you who knew Joan, you knew that she was a warm and genuine spirit and exemplary public servant who served our community with heart and advocated for the LGBTQ community throughout her many years of public service,” Bottoms said.

“The city of Atlanta is honored to celebrate her remarkable life and legacy, and we are eternally grateful for the powerful role she played in empowering the next generation of leaders to influence change in our society,” she added.

Lewis – a longtime vocal LGBTQ ally – received a standing ovation from the crowd.

“I saw individuals in rural Alabama, I saw individuals in the Civil Rights Movement being discriminated against because they happen to be gay. It’s not right, it’s not fair and it’s not just,” Lewis said. “So I come here to say thanks to each and every one of you. And when you see something that is not right, not fair, not just, you have a moral obligation to say something, to do something, and to get in what I call good trouble, necessary trouble.”

“As a people and as a nation that has come so far, we’ve made a lot of progress. But there are forces in America today who are trying to take us back, and we are not going back, we’re going forward,” he added.

“The Atlanta Police Department has not always fared well within the gay community. And I would say that unfortunately, it was indicative of a much larger issue that existed,” Shields said. “I would venture to say that the black community was on the receiving end of very similar treatment for many years long before anyone.”

Shields – the first-ever openly lesbian head of the Atlanta Police Department – said the department has since made changes in the education and supervision of officers.

“I wish I could guarantee that we won’t screw up again, but we employ human beings, and so that would be a falsehood,” Shields said. “But what I will say is we are absolutely committed to putting the training and supervision in place and developing the relationships necessary so that every preemptive measure that is possibly available is taken.”

She said the department will continue to undergo training on diversity and real-life scenarios with LGBTQ citizens.

“The reason for that is so that when you have a young, 22-year-old impressionable officer, and they respond to your 911 call for help, they help you – they don’t just stare at you and question your sexuality,” Shields said to applause.

After praising her “thoughtful and diverse command staff,” Shields ended her speech saying, “I’m proud of my people, but I will also tell you I will hold all of them accountable.”

Shields, like all top officials from Mayor Kasim Reed's administration, submitted her resignation to Bottoms earlier this year. But the new mayor has yet to accept or reject it. Bottoms was one of only two candidates to pledge to keep Shields when asked at a mayoral forum hosted by the Atlanta Gay & Lesbian Chamber of Commerce in 2017.